Known as "The Butcher", Krastinov was the servant of Kirtonos the Herald and the main torturer and provider of bodies and bodily parts for the Scholomance's necromancy experiments.

His first victims were recruited from among the household of Caer Darrow. Among them were servants of the Barov family, Eva and Lucien Sarkhoff. Trapped, tortured and maimed for months, they vowed vengeance on Krastinov even beyond the grave.

"The undead surrounded us, constantly tormenting us with horrifying acts of depravity. Finally, he came. He introduced himself as Doctor Theolen Krastinov. We came to know him as the butcher...We finally understood what the screams were from. The Butcher exposed us to pain that we did not know existed. He used us in countless experiments to devise a plague. The days turned to weeks. We would have died on that first day had it not been for that cruel bastard keeping us alive through magical means....We feel nothing. Our souls remain here, in limbo. We are unable to leave until our remains are found and spirits laid to rest."

Eventually Krastinov was killed for his atrocities, however, Darkmaster Gandling still saw some usefulness out of him and raised him into undeath to continue serving the Scourge. Some students trained under the doctor himself were sent to the Plaguelands.[1]

After his final death, Krastinov's soul was sent to Revendreth, where the venthyr sought to cleanse him of the lust for power that drove him to commit such terrible deeds. His sinstone can be found near the Halls of Atonement.[2]

Entering the Butcher's Sanctum
The doctor is in!

Killing a player
Another successful operation! 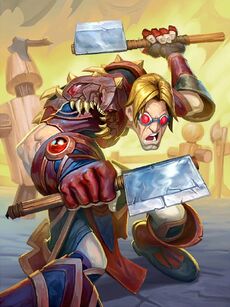 Doctor Krastinov appears as a legendary Rogue/Warrior card in the Scholomance Academy expansion for Hearthstone. His flavor text reads: "He's not a medical doctor."