This article is about the playable race. For the draenei lore, see Draenei. For the in-game faction, see Exodar (faction).

The draenei of the Exodar are one of the playable Alliance races in World of Warcraft, introduced in The Burning Crusade. Their leader Velen and the remaining draenei survivors gained control of one of Tempest Keep's satellite structures and used it to escape to Azeroth. They searched for allies in their never-ending battle against the Burning Crusade, and finding such allies within the Alliance.[1]

They start in Ammen Vale, situated on Azuremyst Isle, a landmass belonging to a cluster of islands called the Azuremyst Isles located off the northwestern coast of Kalimdor. Bloodmyst Isle can be found as the adjacent zone, a level 10-20 area. They have no capital city, instead they make their main dwelling on a crashed dimensional ship, the Exodar, which is overseen by their leader, Velen. The draenei's choice of mount is the elekk, a creature similar in appearance to a war elephant. Their chosen language is Draenei, while they are also able to speak Common. 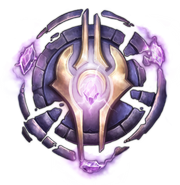 Driven from their home world of Argus, the honorable draenei fled the Burning Legion for eons before finding a remote planet to settle on. They shared this world with the shamanistic orcs and named it Draenor. In time the Legion corrupted the orcs, who waged war and nearly exterminated the peaceful draenei. A lucky few fled to Azeroth, where they now seek allies in their battle against the Burning Legion.

One month ago, a terrible explosion tore open the skies above northern Kalimdor. At that moment, the great ship Exodar, plummeted from the heavens and crashed upon the world of Azeroth. Having fled the ravaged world of Outland, the noble draenei used the dimension traveling Exodar to reach safe haven. Inspired by tales of the heroic Alliance that stood against the might of the Burning Legion, the draenei have come to enlist aid in retaking their shattered homeland. Dedicated to preserving life and upholding the tenets of the Holy Light, the draenei hope to gather a new coalition of warriors to battle the Burning Legion and put a halt to its horrific Burning Crusade. Armed only with courage and their unshakable faith in the Light, the draenei look forward to finding the Alliance and ushering them towards the destiny that awaits beyond the skies of Azeroth. Now, the fate of two worlds rests in your hands.

Empowered by the Holy Light and the undying strength of their convictions, the draenei led the charge against the demonic Burning Legion in Outland. Now, with the Legion's defeat, they have completed the desperate mission that first brought them to Azeroth. Though some draenei were sent back to Outland to revitalize their former civilization, the majority have vowed to stay and uphold their sacred commitment to the Alliance. Driven by a powerful vision, the immortal prophet Velen believes that a great war between the Darkness and the Light is fast approaching and that Azeroth will be its principal battleground. As one of Velen's chosen, you must stand bravely against the Shadow to ensure that your people are ready for the war to come.

Long ago, on the world of Argus, the brilliant and magically gifted eredar race drew the attention of Sargeras, the Destroyer of Worlds. Sargeras offered untold power to the three leaders of the eredar–Kil'jaeden, Archimonde, and Velen–in exchange for their unquestioning loyalty. A troubling vision soon came to Velen, who saw the eredar transformed into unspeakable demons–the first sentient members of the Legion, which would grow to immense size and decimate all life. Despite Velen's warnings, Kil'jaeden and Archimonde decided to accept Sargeras' offer. Velen despaired at his former friends' decision and prayed for help. To his surprise and relief, he was answered by one of the benevolent naaru. These energy beings had, like Velen, foreseen the formation of the Burning Legion.

The naaru offered to shepherd Velen and other believers to refuge. Velen quietly gathered those of his fellow eredar who seemed trustworthy and dubbed them the draenei, or "exiled ones." As Sargeras returned to Argus and transformed many willing eredar into demons, the draenei narrowly escaped their homeworld. Furious, Kil'jaeden vowed to track Velen to the ends of creation. Even as the Burning Legion chased the draenei across the cosmos, the naaru instructed the exiles in the way of the Light. Deeply affected, the draenei vowed to honor the Light and uphold the naaru's ideals. In time the draenei settled on a remote world and met the shamanistic orcs who inhabited it. The draenei came to call their new home Draenor or "Exiles' Refuge."

Kil'jaeden continued to hunt the exiles, however, and he eventually learned of the idyllic world and its unsuspecting inhabitants. Working through the shaman Ner'zhul, the demon lord gradually began corrupting the orcs. When Ner'zhul refused to serve the Legion's agenda past a certain point, Kil'jaeden turned to Ner'zhul's apprentice. Gul'dan worked the orcs into a frenzy of bloodlust, and the newly formed Horde began slaughtering the peaceful draenei. The orcish campaign against the draenei was brutally effective. Over eighty percent of the draenei race was destroyed, though a small group of survivors remained, including the noble Velen. The orcs went on to invade Azeroth through Medivh's Dark Portal. Years later, after the Second War, Ner'zhul's additional portals would tear Draenor to pieces.

Recently Velen and the remaining draenei survivors gained control of one of Tempest Keep's satellite structures and used it to escape to Azeroth. Now they search for allies in their never-ending battle against the Burning Crusade.[1]

Since the incursion of Alliance and Horde forces into the land of Northrend, the draenei have played a minor role. Their greatest presence is seen with Harbinger Vurenn and his entourage in Borean Tundra's Valiance Keep. Even in Northrend the draenei's stalwart adherence to honesty and the Light are crucial in undercutting the efforts of the Cult of the Damned.

Those who play as draenei can choose from the following classes:

Reasons for the classes 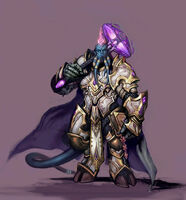 A draenei paladin (vindicator) with the Justicar Armor and a

[Hammer of the Naaru].

A draenei shaman with Gift of the Naaru activated.

The naaru have taught draenei a great deal of things. With the help of the naaru every draenei has learned a basic spell for healing in the form of

[Gift of the Naaru]. Draenei have worked with gems for centuries in a variety of ways such as jewelry or power sources, so they have more skill in

[Gemcutting] than any other race. The draenei are so devoted to the Light and the ways of the naaru that all draenei have a slight