The Draenei Village was a small village of draenei in Outland, discovered by Illidan Stormrage and his lieutenants Kael'thas Sunstrider and Lady Vashj when they ventured to Outland after the Third War. The village, led by Akama, was suffering under attacks by the fel orcs serving Magtheridon in the area. Illidan and his friends decided to help the draenei in order to gain their support against Magtheridon. After crushing the fel orc base nearest to the village, the draenei accepted to join forces. This was the first time Illidan met Akama, and likely the first time Akama and his soldiers received any form of reinforcements.

The mission which these events unfold in is titled Gates of the Abyss and is chapter five of Curse of the Blood Elves - the human (blood elf) campaign in Warcraft III: The Frozen Throne. 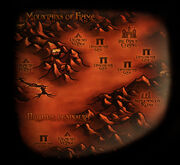 Three draenei villages can be seen on the Outland map used in WC3 - it is unknown which of them Illidan saved.

As seen from the Warcraft III Outland map, this was actually just one of three draenei villages in the vicinity. It is, however, very difficult to estimate where they were located, how far it was between them, and which of them was discovered by Illidan, due to the multiple errors related to the map. For example, in the TBC "Behind the Scenes" DVD, one of the designers stated that players had only visited Hellfire Peninsula during Warcraft III. However, the dimensional gateways' locations in World of Warcraft revealed that Gates of the Abyss actually takes place in Blade's Edge Mountains, Zangarmarsh and Nagrand as well - in other words, all over Outland. In the 2.1 patch trailer, Akama and his followers are shown to have taken refuge in Zangarmarsh after escaping the Temple of Karabor (aka Black Temple). If Illidan really did find the village in Hellfire Peninsula, it was then likely located to the west at the border between Zangarmarsh and Hellfire Peninsula. The Warcraft III-draenei's usage of giant mushrooms to build their houses is also similar to Telredor in World of Warcraft.

Saving the draenei village is actually an optional mission. It will be available as soon as the player discovers the village. Akama will still join Illidan in his next chapter to defeat Magtheridon whether you complete this quest or not.

Quotes related to the quest

After the orange fel orc base have been defeated:

Freed draenei prisoners (found in camps around on the map):