“Within the Dragonblight, the one-time seat of the nerubian empire, dense forests surround an arctic wasteland littered with the massive bones of dragons who came here to die. Here also resides the Chamber of the Aspects, where the five great Dragon Aspects were given their charge to watch over the newly created world of Azeroth.”

The Dragonblight, also called the Great Dragonblight,[1] is a great dragon graveyard valley, located in southern Northrend. The entrance to the nerubian kingdom of Azjol-Nerub can be found in the mid-west part, while the mysterious Wyrmrest Temple resides in the middle. The magnataur village of Bloodmar is here also, as well as the ruined taunka capital of Icemist Village, and the nerubian conclave of Sundered Monolith. The Forsaken base of Venomspite, as well as the human stronghold of Wintergarde Keep are located to the east. The Scourge citadel of Naxxramas is floating in the skies above Wintergarde.

The bones are zealously guarded by Malygos and his blue dragonflight, but the rise of the Lich King and the Scourge allowed the undead to claim many sets of bones from the graveyard and use them to create frost wyrms for the Scourge forces. The Dragonblight was also the home of the first humans to fall victims to the Plague.[2][3]

Most of Dragonblight is covered in ice and snow.

The Dragonblight is the area where Galakrond was defeated and his remains are seen to this day. The titans through the titanic watchers blessed the five proto-dragons - Alexstrasza, Nozdormu, Ysera, Malygos and Neltharion.[4] It is known to be a final resting place for dragons.[5]

Around the year 823 BDP, Aegwynn traveled to the Dragonblight to aid the dragonflights in banishing a pack of demons that were draining the potent arcane energies of the blue dragons. Just as the last demon was banished from the world, the Avatar of Sargeras appeared to battle her.[2][6]

A human village was located here. Approximately two years after the end of the Second War, it was destroyed by Lich King's plague of undeath.[7][3]

After making landfall at the Howling Fjord on his hunt for Mal'Ganis, Prince Arthas moved his ships and troops north and west to Dragonblight;[citation needed]  here the Alliance emissary conveyed King Terenas' order to recall the expedition, and here Arthas had his ships destroyed, trapping his forces in Northrend. A few days later, Mal'Ganis attacked his encampment with overwhelming numbers, prompting him to seek out Frostmourne in a cavern to the north.

When death knight Arthas returned to Northrend after having destroyed the northern regions of Lordaeron, answering the Lich King's call to fight Illidan Stormrage, his first base camp was on the southern coast of Dragonblight.[citation needed] 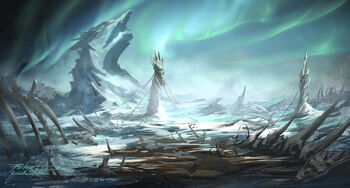 For millennia the Great Dragonblight has served as the enduring heart of Northrend.

Here dense forests surround a vast Arctic wasteland littered with the massive, gleaming bones of perished dragons. In the center of this frozen expanse lies Wyrmrest Temple, a structure believed to be built by the world-shaping titans shortly after Azeroth's creation. Many legends hold that the five great Dragon Aspects were blessed within this fortress and given their charge to watch over the budding world. Perhaps it is for this reason that dragons nearing the end of their lives come to the Dragonblight to enrich the land with their passing.

Surrounding Wyrmrest Temple are five majestic dragon shrines: red, bronze, green, blue, and black, each blessed with the powers of its respective flight. In recent times the undead Scourge has laid siege to these shrines in an effort to further its attempts at raising terrifying new variations of undead dragons to serve the Lich King.

In an attempt to arrest these invasions, the red Dragon Aspect, Alexstrasza, has begun recruiting heroes to aid in the fight against the Scourge, even as the taunka and tuskarr wage their own desperate battles against the undead. The one-time Scarlet Crusade, now the Scarlet Onslaught, has arrived as well in the hopes of claiming victory in their ongoing campaign against the Lich King and his minions.

Both the Alliance and the Horde have begun establishing a presence in the Dragonblight, taking a particular interest in the barred entrance to Icecrown, Angrathar the Wrathgate. There both factions have begun gearing up for the siege that will inevitably lead into the lair of the Lich King himself.

The immediate dangers of the Dragonblight are posed not only by the Lich King, however, but also by the blue dragonflight. Determined to manipulate all existing magic to serve his own purposes, the blue Dragon Aspect, Malygos, has ordered his flight to maneuver colossal machines into key positions over magical ley line clusters. Many believe that these dire constructs are intended to realign the paths of magical energy that course beneath the earth. If successful, Malygos's tampering could result in an ecological and magical catastrophe that would threaten not only the stability of Northrend, but ultimately the equilibrium of the entire world.

After Cho'gall's death, the Twilight's Hammer invaded Wyrmrest Temple, resulting in a battle of the four dragonflights against the cultists.[8]

Dragonblight is where the majority of the final battle against Deathwing and his allies took place, and its future version can also be visited via Caverns of Time.

The Cataclysm-era region featured in the instances is mostly unchanged by the Cataclysm, the only notable change is a presence of three maws: Go'rath, Shu'ma and Maw of Destruction, that have surrounded Wyrmrest Temple and burrowed their tentacles inside the Chamber of the Aspects.

Okrut Dragonwaste and his enslavers arrived to the Dragonblight to capture and subjugate dragons in the name of Warchief Garrosh Hellscream.[9]

Map of the Dragonblight.

The forests of Dragonblight as seen in-game. 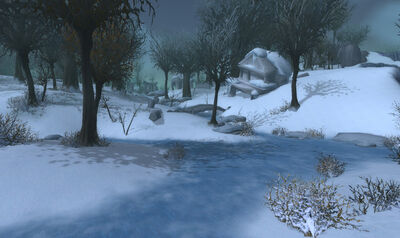 The prevailing questline from the Alliance perspective is the attack of the Lich King's forces upon Wintergarde and the siege at Angrathar the Wrathgate. A short side story relives some important events from Warcraft III: The Frozen Throne at the Frozen Coast and Frostmourne Cavern.

Both mortal factions and the dragonflights represented at Wyrmrest Temple are concerned with Malygos's disastrous redirection of ley line energies at Moonrest Gardens and the Azure Dragonshrine and the Scourge attacks at their respective dragonshrines.

Rare Elite NPCs associated with the

Those who have braved the chill wind speak of a graveyard called Dragonblight. Treasure is rumored to lie beneath draconian bones, but vigilant dragons watch this sacred ground for foolhardy graverobbers.[12]

The Dragonblight and Tundra Coldhoof in Lands of Mystery.

The Dragonblight is a depressing sight. Once this valley was a thriving land, the most fertile in Northrend after the Sholazar Basin, though that was a long time ago. Now it is a vast wasteland where even the snow and ice seem drained. Most of the Dragonblight is a single enormous valley filled with bodies. Although not just any bodies, but dragon bodies. Ailing and old dragons, from every dragonflight, from all over the world, come here to die.

The ground is littered with dragons of all colors. Black, red, green, blue and bronze, they all lie here together, all their differences set aside in death. The mightiest creatures in the world, laid low by age and illness and attack. The land has never recovered, and never will. It weeps for its lost children and remains barren in their memory.[13]

The Dragonblight seems peaceful at first, it is not, however. Nerubians stalk the valley, Scourge creatures patrol it, dragons protect it, and other creatures scavenge through it.[14]

Thousands of years ago, before the Sundering, this region was settled by blue dragons. At some point the black dragon Deathwing attacked them, slaughtering the blue dragons by the dozens. The survivors fought back but were no match for Deathwing's ferocity. In the process, their homes were destroyed and the land so damaged it could never recover. That area became known as the Dragonblight. The leader of the blue dragonflight, Malygos, in his rage and grief, split his home located to the west from the rest of the land, creating the gap later named the Westrift in the Borean Tundra.

The remainder of the blue dragon race settled on Malygos's island, which they named Coldarra, and carved out homes of their own. They gave up the war against Deathwing and the black dragonflight and chose to withdraw from the world. Soon they lost themselves in study, though they always look toward the Dragonblight and the spirits of their kin still lingering there.[15]

Nothing particularly noteworthy has happened ever since.[14]

Of the living, the most common creatures here are nerubians. The entrance to Azjol-Nerub sits near the northern edge of the Dragonblight, just below Crystalsong Forest; and before the Scourge came the spider-men wandered freely through this region, moving among the dragon corpses without a care. Now those who survived the War of the Spider find refuge up here, using dragon bones for cover from Scourge patrols. They hatch plans to reclaim their kingdom but lack the numbers or the strength to succeed.

Tauren live here as well, though only in Icemist Village, where a pack of Icemist tauren settled on the western edge of the Dragonblight, on the shore of Lake Wintergrasp. They don't venture into the blight proper very often, preferring the clean cold of the lake to this bitter air of doom and death.

Scourge creatures wander through here all the time, probably looking for ways to use the dragon remains, or searching for any artifacts the dragons left behind. Since they can't pass through Crystalsong Forest, the Dragonblight also provides the only route to the east of Northrend, unless they want to scale the Storm Peaks. Most of the Scourge creatures lurk near the northwestern corner, close to Icecrown Glacier.

Some blue dragons live here as well. They tend their fallen kin and pay their respects. The dragons live in Wyrmrest Temple, down toward the southern shore. They communicate regularly with their kin in Coldarra. They seem to rotate through since even a dragon can stand only so much of this gloom.[13]

Map of the Dragonblight in Lands of Mystery.

Most of the Dragonblight is a single valley, sloping southward to the Shiverwind Coast. Low hills rise along the sides, taller to the east where they butt up against the Grizzly Hills and Zul'Drak. To the north, a thin line of tall, sharp-edged cliffs breaks the land where Icecrown Glacier begins. The western edge borders the Borean Tundra and Lake Wintergrasp, the ground there is low and even and frozen solid.

Many animals live here, feeding off the dragons' remains. Birds, bears, spiders, wolves and bats all tear at the remains or at each other. There are also wendigo, sasquatch, and worg packs as well. Strange that a communal graveyard should support so much life, but maybe the dragons would find it appropriate. Thanks to the Scourge, undead animals wander here as well, killing and converting the living where they can.[13] Large numbers of magnataur led by Grom'thar the Thunderbringer of the Bloodmar, and the nomad Dammia Frostcut dwell the region too.[16]

The Dragonblight is an eerie place and it is hard to imagine anyone that would want to live here. Everywhere you look you see dead dragons and their remains. Most of the creatures here shelter beneath or behind or even within dragon carcasses. A few dig shallow pits into the valley wall or settle beneath the rotted trees that dot the landscape. The region has only two settlements of any real size, Icemist Village and Wyrmrest Temple. Everything else is a single family or a small band, a pack at best.[14]