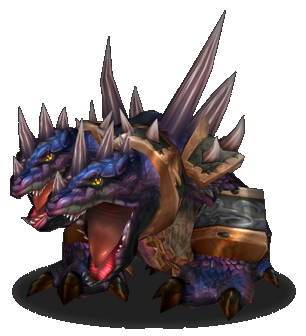 Drakeadons are part of the Core hound family of exotic Ferocity pets, only being tamable by hunters with the talent

[Exotic Beasts]. However only Chromehounds and Chromaggus are tameable to hunters. Getting to Chromaggus may require a bit of aid, as he is the second-to-last boss in Blackwing Lair. In patch 5.1.0, another of Nefarian's horrific creations is on the hunt, and can be seen wandering the main road in Blackrock Mountain.

It is theorized that drakeadons (or at least Chromaggus) may have been genetically modified core hounds who have been captured by Nefarian, mixing dragon and core hound genetic structures.