Not to be confused with Eliza. 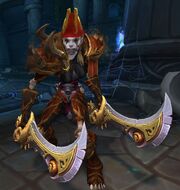 Dread Admiral Eliza Goreblade[2] is an undead pirate located in the Temple of a Thousand Lights in Azsuna. She is the wielder of the Dreadblades. Her ship is Horizon's Edge.

Shortly after the Cataclysm, Eliza of the Bloodsail Buccaneers discovered a pair of ornately crafted cutlasses inside a recently unearthed wreck not far from Booty Bay. Upon taking up the blades, Eliza received a vision of herself leading a massive pirate fleet, conquering all the seas of Azeroth and destroying any who opposed her. What she did not realize was that the vision was sent by the eredar Talgath, who quickly corrupted her and her crew. They spent several years pillaging countless ships across the Great Sea. When the rest of the Bloodsails realized the depths of her insanity and attacked her, she fought off their attack and took control of their flagship, the Crimson Veil.

In time their corruption caused Eliza and her crew to wither away to skeletons, but she had long since stopped caring about anything but feeding the Dreadblades' thirst for blood. Just prior to the Burning Legion's third invasion, Talgath revealed himself to Eliza and offered her even greater power if she pledged herself and her crew to the Legion; Eliza agreed without hesitation. Her crew destroyed several convoys of Alliance and Horde ships bringing supplies to the Broken Isles.[2]

Working with the Uncrowned, Fleet Admiral Tethys of the Bloodsail Buccaneers enlisted the aid of a rogue adventurer in retaking their ships from Eliza's crew. The rogue pursued Eliza into the Temple of a Thousand Lights in Azsuna, where she was slain.[1]