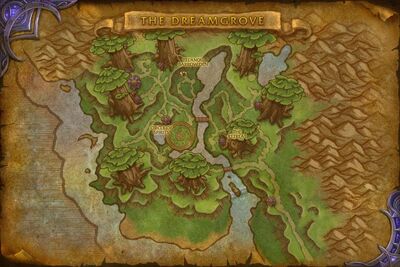 Tome of the Ancients

A large book located north of the Circle of Spirits. This tome starts blank but will grow to hold the lore, history, and powers of the druid artifacts as the player funnels order hall resources into it. Every two work orders provide a new page in the tome. Celadine the Fatekeeper is the artifact researcher.

The Artifact Forge is located west of the Circle of Spirits. It allows players to upgrade their artifact as well as change its appearance. Tender Daranelle can refund artifact power.

The Dreamgrove can be accessed on foot via a dirt path running north from the Temple of Elune along the shoreline. Non-druids who attempt to enter are put to sleep by the ancient protectors at the border and teleported out.