For the character from the main universe, see Drek'Thar.

Drek'Thar is a shaman of the Frostwolf Orcs. Drek'Thar's loyal frost wolf companion is Wise-ear.[1] 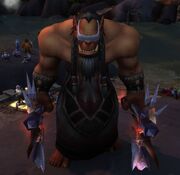 Drek'Thar during the Assault on the Dark Portal. 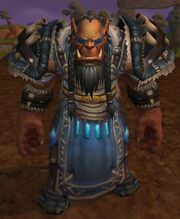 Drek'Thar at Throne of the Elements.

Drek'Thar was captured by the Iron Horde in Tanaan Jungle, and was tied with Exarch Maladaar above fire. The two were freed during the Assault on the Dark Portal by Azerothians. Joining Khadgar's group, after Blackrock Quarry was flooded, Drek'Thar sensed the presence of Durotan's older brother, Ga'nar, and asked the adventurer to free him. He then helped the Azerothians to fight the Iron Horde orcs under the Iron Worldbreaker. Once the Dark Portal collapsed, they began running for the docks and Ga'nar noticed Grommash, wanting him to challenge but Drek'Thar stopped him. Once they reached the ships, the shaman and the Horde left Tanaan for Frostfire Ridge.

When they landed, Drek'Thar vouched for the Horde and Durotan accepted new allies. For a time he stayed in Frostwall, later taking Thrall and the commander to Wor'gol, home of the Frostwolves. Once there, the shaman reunited with Wise-ear and blessed the adventurer through a shamanstone. The Horde then assisted Durotan and Ga'nar with the assault on the Bladespire Citadel, leaving Draka and Drek'Thar home. The Thunderlord orcs took a chance and attacked Wor'gol. The Iron Wolf commanded to kill Drek'Thar. Warleader Gargrak took the blind orc but the adventurer quickly intervened, killing the Thunderlord orc. The Thunderlords were a part of the Iron Horde, of which the farseer received a vision. The Iron Tide would conquer all of Draenor. He sent the commander to warn Durotan about the vision.

When the Frostwolves launched their counter-attack on the Thunderlords and captured the Thunder Pass, Drek'Thar participated the fight against the invading Iron Horde orcs. During the battle, he noticed Thrall's fighting technique and commented that he had a great teacher. Draka suggested the shaman to collapse a cliff. He began summoning a lightning but needed more time so Ga'nar went to hold off the enemies. Once the spell was completed, the cliff collapsed burying Ga'nar and the Iron Horde, blocking any more incursion.

Once the war moved to Nagrand, Drek'Thar answered the call of the elemental Furies and asked the commander to help him to restore the balance of the elements caused by the disappearance of Gordawg. It was revealed that Cho'gall had captured the missing Fury. The farseer and the commander entered Oshu'gun, commanding him to eliminate the threat of the pale orcs and release the captured elemental spirits. They entered the center of the Mountain of Spirits and found Gordawg and the corrupted naaru K'ure. They both needed to be killed. With the threat and obliteration of Nagrand reverted, Drek'Thar returned to the Throne of the Elements.

Back in Frostfire, Draka asked the farseer to renew the connection to the elements and left for the Farseer's Rock, north of Frostwall. They were soon joined by the commander and while Draka fought the attacking goren, Drek'Thar meditated and received a vision about a captured elemental Fury in Magnarok. Exurotus was captured by magnaron Kron. Drek'Thar and his two allies entered the area, freed elements, killed goren and found the Fury but they were unable to free him. Once Draka and the commander killed Kron, Drek'Thar merged with Exurotus a feat Thrall commented as a beginning of Draenor's greatest shaman.

When Gul'dan took over the Iron Horde and located the Cipher of Damnation, Drek'Thar arrived in Tanaan to protect the world's shamanism. He joined the renegade warlock Oronok Torn-heart and disabled a barrier in... where Gul'dan just summoned Cyrukh. The two casters were left weakened by the spell but the commander killed the elemental lord, destroying the Cipher and thwarting Gul'dan's plan. Drek'Thar thanked him for it.

Some time later, Drek'Thar led the ritual in the Throne of Elements to enhance the commander's legendary ring. He summoned the powers of elemental spirits and the adventurer rose with a new power.

In Pursuit of Gul'dan

Without you, I would still be in that jungle, or worse.

Throm-Ka, <class>. Elements be with you.

Throne of the Elements

This is the Throne of the Elements.

You stand in the presence of furies, <name>. Here, the earth lives beneath your feet and the wind watches your every move.

This place is truly hallowed ground.