The druid's most notable ability is shapeshifting into different forms. All the forms are obtained from the trainer (or from spending talent points) and are no longer obtained with quests. 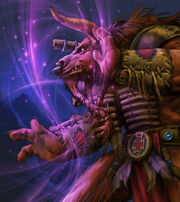 For all forms, the following applies:

If you shapeshift while wearing any disguise, your form buff will remove the disguise buff. This is because it has a blanket effect and can cause unexpected bugs when two buffs are stacked. Items like the

[Noggenfogger Elixir] were changed in 2007 to not stack with Druid forms so that it would not cause any future problems. Subsequent issues have arisen, such as the jet-pack required for Gunship Battle, giving the message "Cannot use whilst shape-shifted". This can make completing some achievements more challenging for feral and balance druids, such as

[With a Little Helper from My Friends], requiring creative thinking such as spending the battles as a gunner in Wintergrasp. 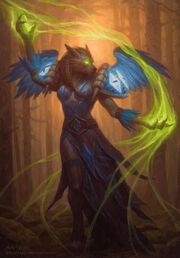 Each race has a distinct model for its bear and cat forms, and there are five different textures for each model. These textures correspond to the skin tone of Tauren druids, or the hair color of the other races. Druids can change their design at any time by visiting a barbershop and choosing a new skin tone or hair color as appropriate for their race. Since there are more hair colors and skin tones than unique textures, some colors and tones will produce the same designs. The hair and skin colors chosen will, in most cases, correspond to the colors seen in the design of each form. Similar colors that share a particular cat texture will not necessarily share the same bear texture.