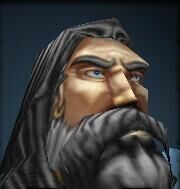 Duke Lionheart was a paladin of the Knights of the Silver Hand who followed Jaina Proudmoore and many human refugees to Kalimdor.

He was placed in charge of an orc and human base near Mount Hyjal with the intention of hunting down the remaining demons after Mannoroth's death. Lionheart upheld orderly conduct, as the humans and the orcs often argued. He didn't seem to mind working with the orcs, unlike some of his men. Tyrande and Shandris Feathermoon watched them from the bushes and eventually killed the paladin since Tyrande thought his presence defiled the forest.[1]

Footman: Bah! We shouldn't even be here. Or siding with the orcs.
Grunt: We're here to hunt the remaining demons, human. You're lucky our goals are the same.
Duke Lionheart: All right, you men. Mind your business. Back to work.

He may be related to Delora Lionheart.