[20] Welcome to the Machine, where the player sends him on an adventure.

He later shows up in the Azurelode Mine where he's fallen victim to the spiders there. After being rescued, Captain Keyton asks the rescuer if they have heard of "survival of the fittest". Keyton then orders Dumass to travel to Tarren Mill, though Dumass seems to believe it is found somewhere in the Barrens. His whereabouts after this is unknown.

His dialogue indicates that Dumass suffered the most extreme side effect (being stripped of any and all rational thought) that can happen from being resurrected by the Val'kyr. 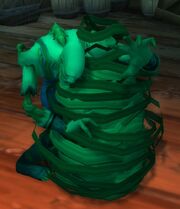 Trapped in the mine