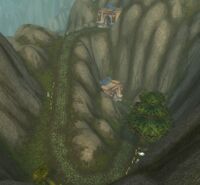 A portion of the Dun Algaz road.

Dun Algaz (or Algaz Gate)[1][2][3] is the tunneled mountain pass area between Loch Modan and the Wetlands, as well as the name of a stronghold located in the pass. It is bordered by Algaz Station in Loch Modan and Slabchisel's Survey in the Wetlands.

Dun Algaz predates the War of the Three Hammers; the Wildhammer dwarves traveled through it after being ousted from Ironforge during the war.[4]

Following their defeat at Dun Modr, the orcs were forced to retreat south across the Thandol Valley to a secondary outpost at Dun Algaz. Anduin Lothar, hoping to push the orcs even further back into Khaz Modan, ordered the destruction of the outpost.[5] Ultimately, their assault was unsuccessful and Horde forces were still prominent in the area. It became the Horde's last hold.[6]

10 years ADP, Nekros Skullcrusher ordered his clan to move from Grim Batol to a new cave complex concealed within the mountain pass of Dun Algaz.[7]

In recent years, the post was overrun by orcs from the Dragonmaw clan, forcing the dwarven mountaineers to abandon it and fall back to the upper tunnel of the pass. Travel between the dwarven homelands and Menethil Harbor is far more dangerous as a result, and anyone passing through Dun Algaz must be either powerful or quick.

The Dragonmaw camp and fortress.

The dwarves are outraged to learn that Dragonmaw orcs are still occupying the abandoned fortress.[8] Even worse, they stole an ale barrel from a couple of traveling mountaineers.[9]

Dun Algaz Gate is located in the northwestern corner of Loch Modan, and it was a great mountain stronghold in the Second War. Now, the derelict fortress of Dun Algaz serves as the main thoroughfare from Loch Modan and the dwarven lands in the south to the Wetlands in the north.[10] A series of one thousand stone steps carved into the rock lead from the Wetlands southern reaches to the top of an elevation rise of which is Dun Algaz Gate and the entrance to Loch Modan.[11]

Goblin sappers, hired by an unknown enemy, blasted Dun Algaz Gate and severely damage the edifice. The gate had to be repaired before another attack. King Magni Bronzebeard offers a sizable reward to whoever discovers the enemy behind the sabotage.[10]