For the lore of the zone and its status after the Cataclysm, see Dun Morogh.

Dun Morogh is a snowy region located between the magma-strewn wasteland of the Searing Gorge to the south, the gentle ridges of Loch Modan to the east, and the swampy Wetlands to the north. Dun Morogh is home to both the gnomes of Gnomeregan and the Ironforge dwarves and is the location of the major city of Ironforge. The Khaz Modan mountains surround Dun Morogh on all sides, making it accessible only by certain passes that are currently watched over by dwarven troops.

The center of dwarven culture and ingenuity, Dun Morogh holds the capital of Ironforge. The region is snow-swept and forested, with gray, craggy mountains and slinking wolves. Troggs recently overran Gnomeregan, the gnomes’ former capital, and drove its citizens to Ironforge. Frostmane trolls menace dwarven patrols. Several villages and towns dot the landscape, and though the trade routes can be perilous, dwarven mountaineers and warriors keep their settlements safe.[1]

Homeland of the Ironforge dwarves and ruled by mighty Bronzebeard Clan, Dun Morogh is the center of dwarven culture and ingenuity. The capital city of the dwarven realm, Ironforge, lies within Ironforge Mountain in Dun Morogh’s iced heart. Dwarves and their allies range out from Ironforge, trying to hold a diminishing protectorate against encroaching enemies on all sides (Troggs, Trolls, Dark Irons). Dun Morogh is a high altitude region, covered with constant snowfall and great pine trees. Winds howl through the peaks in symphony with the wolves that prowl the crags. Southwest of Ironforge is Coldridge Valley, which hosts the dwarven smithing enclave of Anvilmar. Northwest of Ironforge’s massive stone battlements is the ancient city of Gnomeregan. This ruined city was once home to the Ironforge gnomes, but vile Caverndeep troggs devastated the populace and drove the survivors to the capital. Gnomeregan is now a wild place of adventure and mystery. To Ironforge’s west is Frostmane Hold, home of the aggressive Frostmane ice trolls. Crime is almost nonexistent in dwarven lands, as dwarves know that they must stick together against their myriad enemies. Murder and treason are capital offenses, while lesser crimes result in exile or prison.[2]

Centuries ago, the Dark Iron dwarves split from their Ironforge brethren, summoning Ragnaros and devastating the land in the process. The warriors of Ironforge drove the Dark Irons to near extinction, and the few survivors fled deep underground in the Blackrock Mountain to their fiery lord. In the fourth year since the opening of the Dark Portal, Dun Morogh’s dwarves and gnomes joined the Lordaeron Alliance in the Second War. Ironforge dwarves and gnomes were key in the Horde’s defeat, and many nurse grudges against orcs to this day. Not long ago, gnomes in Gnomeregan unearthed the mythic troggs. These tribal creatures slaughtered Gnomeregan’s populace and drove the gnomes to Ironforge, where they hide and nurse their wounds. This catastrophe explained why Ironforge gnomes did not take part in the Third War. The troggs also prove an excellent distraction for Ironforge’s forces, allowing the Frostmane trolls to invade Dun Morogh in an attempt to reclaim their ancient lands.[3]

The snowy peaks of Dun Morogh have been the home of the dwarves and gnomes for centuries. The two races have generally lived on friendly terms, trading between their own respective cities, Ironforge and Gnomeregan. During the Second War, both races joined the Alliance of Lordaeron after the orcs invaded Khaz Modan. Their service proved invaluable to Alliance forces, and between dwarven brawn and gnomish brains, the orcs never succeeded in taking either capital. During the intervening period between the wars the gnomes and dwarves grew closer together, working jointly on a number of major projects. Since the destruction of Gnomeregan, the remaining gnomes have been forced to flee and seek protection within Ironforge. This peaceful region is now threatened by the troggs who have begun appearing all over the area.

Ironforge dwarves, the most prominent race in Dun Morogh, are a hearty, good-natured people who enjoy working with their hands, drinking ale and firing blunderbusses. Dwarves are ingenious, and about half of all technological devices in Azeroth are dwarven-made. Ironforge dwarves are particularly adept at crafting and wielding firearms, and their riflemen proved an invaluable help in the Third War. Feisty and strong, Ironforge dwarves possess a strong sense of humor and a forgiving nature. All who dwell in Dun Morogh, be they dwarf, gnome or visitor, wear layers of clothing to stave off the cold. Long, thick cloaks of blue or green are common. Ironforge dwarves take pride in their beards and wear them long. When patrolling Dun Morogh, dwarves carry axes, rifles and other weaponry and wear heavy armor. Gnomes rarely leave Ironforge, but those who do so are similarly equipped. Like dwarves, gnomes are adept tinkers and engineers and often walk about with safety goggles on their foreheads and various gadgets strapped to their belts.[2]

The snow-swept land of Dun Morogh is covered with forest and craggy mountains. Dun Morogh is a high, mountainous region and is cold, windy and wet. Snowfall is common, and a white blanket constantly covers the ground. Great wolves and snow leopards stalk the forests, and troggs and Frostmane trolls find many ambush spots. Ferocious bears are known to live in many of the shadowy dens that are riddled into the mountainside. Dwarves used to have to battle few monsters in their own homeland, but things have changed. Dun Morogh has not seen true peace in decades. Ironforge is the capital of the dwarven realm and provides protection and succor for its citizens. Though the dwarves’ enemies have multiplied in recent years, several smaller villages also stand against the burgeoning evils.[4]

Dun Morogh contains no raid dungeons, micro dungeons, or battlegrounds. Gnomeregan, an instanced dungeon for adventurers levels 28 to 35, can be found in the western part of the zone, beyond Brewnall Village. Dun Morogh is the starting area for the dwarves and gnomes, and so it contains a very sheltered 1-5 leveling area - Coldridge Valley. The dwarven city, Ironforge, can also be found in this zone, and is one of the major Alliance trade and travel hubs. 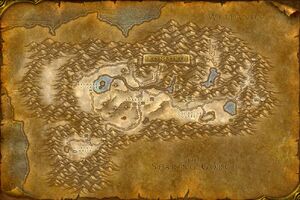 The only flight path in Dun Morogh is in Ironforge. Ironforge is one of the busiest travel hubs for the Alliance, since it is situated near the center of the continent and is also a capital city and a center for trade.

Dun Morogh is home to several dwarves and gnomes of status. From the base camp in Coldridge Valley, Grelin Whitebeard sends promising young dwarves and gnomes out into the world. In Brewnall Village, Rejold Barleybrew leads the effort to discover the best recipe for ale, and in Kharanos, Senir Whitebeard seeks to eradicate the foothold the ice trolls have established in the region.

Since Dun Morogh is the starting zone for dwarves and gnomes, the quest range here is level 1-12. Quests in Dun Morogh include explorations from Brewnall Village in the west to the North Gate Outpost and South Gate Outpost in the northeast. There are battles against leper gnomes near Gnomeregan and troggs in Gol'Bolar Quarry. There is range of things to do from the fun of replacing a barrel of Thunder Ale to the danger in tracking down a dangerous yeti.

Coldridge Valley is the starting subzone with the level 1-5 quests. Kharanos is the central village for those following most zone quests. Ironforge is the capital city with quests geared towards leading to other zones.