For the demon pretending to be a warlock quest giver, see Durak (demon). For the Earthen Ring member, see Durak Flamespeaker. 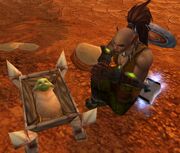 Durak with his mother in Mists of Pandaria.

Durak[1] is the orc son of Aggra and Thrall. Aggra was revealed to carry Thrall's baby by Alexstrasza moments after the death of Deathwing. Months later, after the Maelstrom was fully healed, they left for Durotar and settled in The Den in Durotar. Before Thrall left for Orgrimmar, he asked Vol'jin to take care of his mate and son should something have happened to him.[2]

Thrall and Aggra took their baby to the trial of Garrosh Hellscream. During a break, Thrall took him on a ride on Snowsong to One Keg.[3] After the catastrophic loss at the Broken Shore, Durak is briefly seen in Dalaran at the Broken Isles with his parents.[4]

Durak moved to Nagrand in Outland with his parents, living in a hut near Oshu'gun.[5] When Thrall joined the Horde Council in Orgrimmar, his family remained in Nagrand. Aggra taught Durak and Rehze how to weave.[6]

It is unknown who took care of Durak while his parents were on Draenor. It may have been Ryal, his grandmother.