For the lore of the zone and its status after the Cataclysm, see Duskwood.

Duskwood is located in the southern-central part of Azeroth, south of Elwynn Forest, east of Westfall, west of Deadwind Pass, and north of Stranglethorn Vale. Technically part of the Alliance and under Stormwind's protection, its distance from the mighty fortress and its close proximity to more malevolent forces in the south and east make it a realm of horror.[1] Due to events central to the Scythe of Elune, Duskwood is a cursed, dying land. Beneath the eternal blanket of darkness which gave Duskwood its current name, the Scythe's effects have transformed what was once a beautiful part of Elwynn Forest into a land covered in gnarled trees and inhabited by the hideous undead and extradimensional Worgen, brought along with the black fog hanging over the woods. Ogres moving in from Deadwind Pass have brought up even more problems.

Long betrayed and abandoned by Stormwind, Duskwood is inhabited by a defiant people who still cling to their holdings in the face of overwhelming adversity. On all sides lurk dangerous creatures, from skeletal warriors and ghouls to ferocious worgen and some of the most powerful members of the Defias Brotherhood. The militia of Duskwood, known as the Night Watch, patrol the main thoroughfare and protect Darkshire, wary of anything moving through the shadows.

The most prominent geographical feature of Duskwood is an ancient and long-dead volcano crater. The crater teems with life, and features one of the Great Trees with a portal leading into the Emerald Dream. The sleeping druids' influence can be seen on the surrounding land, which is cloaked in a twilight quite different from the rest of Duskwood. The woods also feature several abandoned farmsteads, as well as the prominent Raven Hill Cemetery, which holds the graves of the numerous people who have been killed by wild beasts and undead since the darkness fell.

Duskwood was not always the way it appears now. Located in the southern reaches of the Kingdom of Stormwind, the southern part of Elwynn Forest was the location of two sizable towns, now called Darkshire and Raven Hill, before the area was overcome by shadow.

A night elf by the name of Velinde Starsong came to the woods carrying the Scythe of Elune. Unknown events occurred and the Scythe found its way to the mine now known as Roland's Doom. What exactly happened to her after that is unclear, but it is likely she was killed by something that did not approve of her actions. The powerful weapon was later found by a man who was part of a team of men who had entered the mine looking for the source of its darkness. Jitters picked up the weapon, triggering its effect of summoning. The mine was immediately filled with worgen, who then proceeded to rip the men apart. Jitters escaped with the weapon, but was hunted by the worgen across the woods, which were steadily darkening with the scythe's released curse.

In an attempt to rid himself of their chase, Jitters disposed of the weapon nearby at the Yorgen Farmstead, whereupon he encountered the Black Riders from Deadwind Pass. The riders slaughtered Sven Yorgen's family in front of Jitters' eyes. The frightened man then escaped to Raven Hill. The darkness lingers in Duskwood, although it is unclear whether the Black Riders claimed the Scythe of Elune and took it with them back to Karazhan. Now the people huddle in former Grand Hamlet, renamed Darkshire, battling the undead and wolf men who inhabit the murky woods.

Horde
From Grom'Gol in Stranglethorn Vale, follow the main road north across the bridge across the chasm and right into Duskwood.

Alliance
From Three Corners in the Redridge Mountains, follow the road south across the bridge into Duskwood. From Westfall, by crossing the bridge to the east. Also, by swimming through the river south of Elwynn Forest.

There are no dungeons of any kind and no battlegrounds in this area. The Redridge Range lies on the eastern border of this zone, as these mountains stretch from the zone of the Redridge Mountains to the zone of Deadwind Pass. 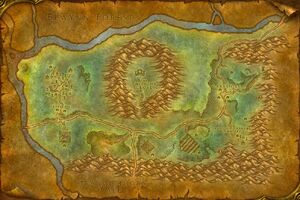 Duskwood is home to several humans of note. In Darkshire, Commander Althea Ebonlocke sends willing adventurers to battle back the evil denizens of the dark woods. At the northwestern corner of the forest, Sven Yorgen directs budding heroes to uncover a magical weapon with which to weaken the evil Morbent Fel located in his dark house on Forlorn Rowe. And at Raven Hill, a frightened man nicknamed Jitters hides from his dark past.

Duskwood is rather unique with regard to its treasure chests. In most zones on Azeroth, treasure chests spawn next to or inside buildings or ruins, often in the middle of a camp of hostile mobs and virtually always with at least one mob guarding it. In Duskwood, especially north of the main road that cuts across the zone, treasure chests will spawn randomly in the forest next to trees and often without any hostile mobs near them. Chests also spawn at ruined buildings in Brightwood Grove and at the remains of a small house near Addle's Stead, generally with only a single hostile beast wandering nearby and it is fairly easy to loot the chests without drawing aggro. For an Alliance character in a level range of mid-to-high 20s, treasure hunting in Duskwood can be a fun and profitable adventure.

Beasts with green scales inhabit this jungle, making it hard to spot them. The tileset is called "Ashenvale".[2]