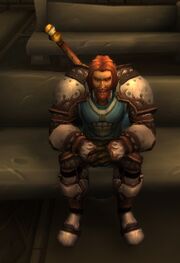 Duthorian Rall in the Sanctum of Light.

Duthorian Rall is a human paladin known to be one of the most influential paladins of the Alliance.[1]

He is a paladin and a knight fo the Silver Hand known to train aspiring paladins in the ways of the Light, often through quests of charity and penance. He is located in the Cathedral of Light in Stormwind City, and during the third invasion of the Burning Legion, in the Sanctum of Light.

Duthorian Rall is present at the Cathedral of Light where he trains and tests the new promising paladins sent to him by Brother Wilhelm and Brandur Ironhammer.[2]

He introduces himself to the paladin adventurer as the responsible for putting paladins on the path to greater virtue as they devote themselves to the Light and defend Azeroth from the Scourge and other threats. He then announces that it is time for them to take their first step to be truly virtuous, and give them a Book of Divinity to study, and thus learn more about the Light.[3]

After the paladin adventurer has advanced in the study of the

[Tome of Divinity], he announces to them that it is time to be tested by bringing help to the people of the city, by acting by acts of compassion and understanding, and thus prove to be a true servant of the Light.[4] When he returns after helping some people,[5] Duthorian gives them a

[Symbol of Life] to see if they are powerful enough to focus one of the Light's greatest gifts, then sends them to save his friend Gazin Tenorm recently attacked by some Defias near Heroes' Vigil.[6]

When the paladin adventurer returned after confirming Gazin's condition and saving the life of Henze Faulk, while allowing the dwarves to recover the

[Defias Script] and prove to the King that he Defias have infiltrated Elwynn,[7] Duthorian congratulated them on passing his test, becoming worthy of being ready for one of the paladin's greatest honors: the power of resurrection.[8]

Duthorian is also in charge of passing the test of valor for promising new paladins, announcing that it should not be taken lightly because it could cost them their lives.[9] Once certain that the paladin adventurer was ready, he sent them to Daphne Stilwell in Westfall to protect her against the Defias.[10][11]

When the paladin adventurer returned, assuring Daphne was safe, Duthorian rewarded them with the

[Bastion of Stormwind] and taught them the ability

[Sense Undead].[12] Afterwards, he sent them to meet her husband Jordan Stilwell in Ironforge to let him know that his wife is safe,[13] before being rewarded by the blacksmith who create for them a worthy weapon, the

Finally, Duthorian is the one who rewards the paladin adventurer for their dedication to the Church of Light and Stormwind by offering them the ability:

Following the death of Tirion Fordring during the Battle for Broken Shore, Daithoran Rall moves to the Sanctum of Light to serve as a Knight of the Silver Hand for the new Highlord.

You will be tested many times by the darkness that surrounds our lands, <name>. But to ensure you are always prepared, we will often ask tasks of you so you are at the height of your own power.

Go with the Light, and remain virtuous.