The Echo Isles are a small cluster of tropical landmasses located off the southeastern coast of Durotar. In addition to being the home of the Darkspear tribe of jungle trolls, the archipelago teems with raptors, tigers, and other dangerous predators.

The largest isle is called the Darkspear Isle or the Echo Isle.[1]

At the height of the Gurubashi Empire, the jungle trolls ruled over lands from Stranglethorn Vale to the Echo Isles.[2]

After being saved by Warchief Thrall, the Darkspear tribe pledged their support to the Horde and with the Darkspear Islands sinking, they joined the orcs in Kalimdor. Much like the orcs created Orgrimmar after the Third War, it's possible that the Darkspear colonized their home on the nearby Echo Isles after the war as well. The Isles were home to sea giants led by Sea King and a deathlord with skeletons.

However, sometime after Kul Tiras forces under the command of Admiral Daelin Proudmoore attacked their new home, forcing them to flee, but not before the mok'nathal Rexxar and his companions aided troll batriders in destroying human battleships. After the trolls were successfully evacuated, they established a new base on the mainland of Kalimdor.[3][4]

After the defeat of Admiral Proudmoore, these islands were once again available to the Darkspears. The trolls, however, only had a few moments to settle down on the Isles before one of their own, Zalazane, betrayed them. The witch doctor, somehow learning the secrets of undeath, took his people by surprise using his zombies and other minions. This once again forced Vol'jin and the other survivors to retreat back to the shores of Durotar. It was on that shore, now known as Darkspear Strand, Vol'jin founded Sen'jin Village.[2]

The warlock Zalazane disrupted the normal flow of magic in Durotar. He did this through tainted fetishes, ju-ju heaps, which he had placed among his huts on the main Echo Isle. These heaps corrupted the wildlife and gave power to the warlocks and infernal creatures that lurked in the land's dark corners. Un'Thuwa sent Horde mages to destroy the ju-ju heaps, eventually resulting in the flow of magic in Durotar returning to normal.[5]

Zalazane continued to send his undead trolls to the mainland, to hex Darkspear trolls and drag more of them under his sway.[6]

It is from Sen'jin Village that numerous attempts have been made to oust Zalazane and reclaim the islands, but Zalazane continuously managed to fool adventurers into believing that they had slain him.

After rallying troll citizens and adventurers of the Horde, along with the help of Bwonsamdi, the Darkspear tribe finally killed Zalazane and retook the isles.

The Retaking of the Echo Isles.

Ritual Dancers could be briefly found on the isles near the ruins of their homes before Cataclysm but after the retake. Some could also be found dancing around the remains of Zalazane, on the isle that would soon to be known as Zalazane's Fall.

Description from the official site

After years in exile, the Darkspear trolls are preparing to invade the Echo Isles and reclaim the land once bestowed to them by Thrall. Led by Vol'jin, a wise and highly regarded Darkspear, the tribe's bravest warriors will set out from Orgrimmar and Sen'jin Village, seeking to bring about Zalazane's fall and begin the process of rebuilding their homes and villages on the Echo Isles. In World of Warcraft: Cataclysm, new troll adventurers will begin their journey on these tiny islands off the coast of Durotar, where they'll be able to experience this time of trial and transition firsthand.

Though the Darkspears may once again have their land, the tribe's turmoil is far from over. The impending cataclysm will spark rivalry among the Horde leadership, and after years of running from a seemingly endless string of conflicts to preserve the Darkspear nation, Vol'jin is done fleeing. The Darkspears have reclaimed their islands and have no intention of settling elsewhere. Of course, as an untested member of the tribe, you'll have some training to do before tackling the Darkspears' larger matters.

Every great hero starts somewhere. As a troll of the Echo Isles, the journey begins with safeguarding your people's well-being. Early in your adventures, you'll be charged with protecting the local Bloodtalon raptors and hatchlings from the sorcery of a nearby sea witch, slaying the beasts that feast upon the Darkspears' primary food sources, and assaulting the naga who've overrun the northern isle. But it won't be long before Vol'jin trusts you with vital—and potentially dangerous—information about the political struggles plaguing the Horde and, ultimately, the fellow members of your tribe.

In World of Warcraft: Cataclysm, you'll face these trials and more in the trolls' new and enhanced introductory questing experience (level 1 to 5). Be steadfast and honorable, and your actions will help usher in a new era of Darkspear perseverance in a time of ultimate peril.

Since Cataclysm, Echo Isles was reclaimed and became the starting zone for new trolls. They begin their training and are helped along the way by Zuni, but not everything is well. The raptors are acting strangely, and the trolls will soon find their homeland threatened again, this time by the Spitescale naga led by Zar'jira the Sea Witch. As players quest throughout the zone they develop a friendship with Zuni and eventually fight side by side with Vol'jin against Zar'jira in order put an end to the invading Naga. After a fierce battle, Zar'jira is slain, but not before she killed Zuni.

During the Pandaren Campaign in Pandaria, an attempt was made to kill Vol'jin by Garrosh Hellscream and at the same time he also sent the Kor'kron to these isles and declared martial law, chaining up the trolls to prevent an uprising. These Kor'kron were led by Gul'tar the Subjugator. Thrall ends up aiding the trolls liberate their home, since he believed the Horde would have been nothing if not for the Darkspears.

A new dock was added connecting the Echo Isles to Zuldazar.

Much of the Horde's naval power was docked at the Echo Isles. Alliance forces were sent to infiltrate the troll capital and set fire to their ships.[7] As such, the Horde constructed greater defenses around their largest port.[8]

The Echo Isles came under attack once again by Zalazane, who broke free of Bwonsamdi and came back as a lich with an army of undead.[9] He was slain using Vol'jin's glaive.[10] 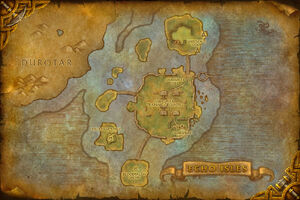 Map of the Echo Isles. 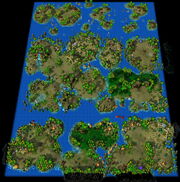 In-game map from the Founding of Durotar.

“Along the shores of the Barrens lie a multitude of islands which the jungle trolls have claimed as their own. The Darkspear trolls maintain outposts to keep watch for imminent dangers from the seas.”

There are two maps of the Echo Isles in Warcraft III: The Frozen Throne:

The following monsters were present but didn't appear in World of Warcraft:

The Echo Isles are found off the southern tip of Durotar. After the Third War, when the Horde settled in Durotar, Thrall made these islands available to the trolls. Eventually, a Darkspear troll named Zalazane decided that the trolls did not need the orcs as allies and began practicing dark magic. He drove his fellow trolls off of the islands, converted followers, and created the zombies who now inhabit the Echo Isles. There is the suspicion that an agent of the Scourge may have influenced Zalazane, since they seem to have a monopoly on zombie-creating crazies.[11][12] Most of the Darkspear tribe relocated on Sen'jin Village in Durotar's coast after Zalazane drove them out. The trolls are trying to fight their way back to reclaiming their island home.[12]

Zalazane's experiments on the Echo Isles progressed much further than the Horde ever anticipated, and the trolls there created greater undead, such as abominations. Warchief Thrall is planning to call for a full assault on the isles before the situation escalates.[13]