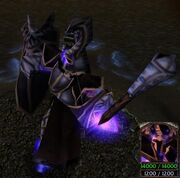 Deathlords are rumored to have once been mighty paladins. In life, Eldritch deathlord committed civilian massacres akin to the atrocity committed by Arthas in Stratholme, going as far as murdering his own family. The paladin, now a deathlord revenant, later came to be found on the Echo Isles. His spirit haunted the islands until he was destroyed by Rexxar, Rokhan, and Chen Stormstout, who claimed his shield as it was a powerful weapon.[1]

Eldritch deathlord is probably the most powerful mob ever in Warcraft III and is the only one that is labeled as level 20.

He drops Shield of the Deathlord. 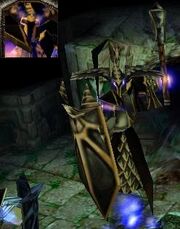 Do not confuse with the level 10 deathlord in Echo Isles from this picture.

From Warcraft III: The Frozen Throne:

Note: Eldritch deathlord is being compared to the deeplord revenant which is the most powerful non-unique revenant.