This article is about the recurring elemental invasions in classic World of Warcraft. For the Cataclysm world event, see Elemental Unrest.

The Elemental Invasions are invasions by elementals at different locations on Kalimdor, occurring sporadically every few days. They take place in Silithus, Winterspring, Un'Goro Crater, and Azshara.

Reports of elemental incursions in different parts of Kalimdor are increasing. Every few days, a new wave of elementals blasts its way into the regions of Silithus, Un'Goro Crater, Azshara, and Winterspring - ostensibly, for the sole reason of seeing just how far into these territories they can penetrate before being beaten back by the forces of the Horde or the Alliance. Investigate these regions and aid your allies in countering these mysterious invasions.[1]

What happens during an invasion?

At the beginning of an elemental invasion, portals will open to the Elemental Plane and invaders will begin to pass through. Thus, during an invasion, you will find two to three times as many elementals in the area, usually slightly higher in level than the standard ones found there.

How often do invasions happen?

No timetable has yet been determined, though some rumors suggest once every three days.

It has been shown that at least Princess Tempestria can spawn within a 40-48 hour period.

Types and locations of invaders

Blazing Invaders appear at the Fire Plume Ridge volcano in Un'Goro Crater. Visually, they look similar to regular fire elementals but are green-yellow in color. When you approach the volcano and see glowing blue-green portals floating slightly off the ground, you know an invasion is in progress.

Baron Charr leads the Blazing Invaders. He heralds his invasion with a challenge: "Hear me, denizens of the crater! I come to burn this land of its impurity!" While he is patrolling, Charr frequently yells, "Where are the so-called heroes of this world? Too frightened to come out and play?" When he vanishes, he yells a final taunt, "You have not seen the last of me fools! All will be consumed in the end!" 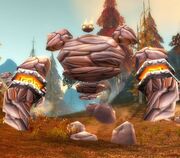 Thundering Invaders appear in northeast Azshara on the upper part of the crescent of land. Visually, they look virtually indistinguishable from regular rock elementals. Fighting the thundering invaders is especially hazardous, as they wander the same area as the elite giants, and the unwary adventurer can often find himself beset on all sides.

The Thundering Invaders are led by Avalanchion. Although immensely powerful, he seems to be significantly less intelligent than either Charr or Tempestria, yelling out taunts like "Where you hiding? Me find you!"

Watery Invaders appear on Lake Kel'Theril in Winterspring. When you near the lake and see glowing blue holes floating above the ice, you know an invasion is in progress.

Princess Tempestria leads the Watery Invaders. She and Baron Charr are definitely the most intelligent of the invasion leaders. Tempestria imperiously demands, "This frozen land shall suffice for a start. Come to me, mortals - and I shall give you a quick and painful death."

Whirling Invaders appear in Northwest Silithus, and resemble silver-black versions of regular air elementals, crackling with blue-green electricity. Look for greenish white shimmery portals as a sign of their invasion.

The Whirling Invaders are led by The Windreaver, who travels with his four guards throughout the Dust Stormer area of Silithus. Those unfortunate enough to see him appear receive dire warnings: "The Windreaver and his invading forces appear amidst a tumultuous conflagration in the northwest of Silithus."