Eligor Dawnbringer is a human paladin originally located at Light's Hope Chapel in the Eastern Plaguelands, and during the third invasion of the Burning Legion, in the Sanctum of Light.

He is the Commander and representative leader of the Brotherhood of the Light, a subsection of the former Argent Dawn's ranks, now the Argent Crusade of which he is a Crusade Commander.

At some point, Eligor Dawnbringer fought alongside Alexandros Mograine, watching the Highlord burned legions of undead in righteous fire before he would even unsheathe his blade.

Commander Eligor Dawnbringer was originally located at Light's Hope Chapel in the Eastern Plaguelands, heading a meeting with Scarlet envoys led by Scarlet Commander Marjhan in order to keep relations between the Argent Dawn and the Scarlet Crusade from turning violent, and to counter an imminent attack from Kel'Thuzad and the Scourge.[1]

Commander Dawnbringer was present during the Battle for Light's Hope Chapel, defending the chapel alongside Korfax and the Argent Dawn against the Scourge and the Death knights of Acherus. Following the withdrawal of the Lich King, he witnessed the merger of the Argent Dawn and the Order of the Silver Hand as the Argent Crusade, under the command of Highlord Tirion Fordring.[3]

He was among the first to plunge into the Northrend campaign, where he appears at Wintergarde Keep in Dragonblight, instructing various 7th Legion troops about the inhabitants of Naxxramas.[4]

Despite Inigo Montoy's treachery in the resurrection of Kel'Thuzad, who became the lich Thel'zan the Duskbringer for serving the Lich King, Eligor and the Brotherhood eventually triumphed over the Scourge in Northrend and returned to the Eastern Plaguelands.

Eligor Dawnbringer, now Crusade Commander following the war against the Lich King, appeared alongside Korfax and Archmage Angela Dosantos outside Tyr's Hand in the Eastern Plaguelands to cleanse the town from the Risen who infested it with an assault force of one hundred men.[5] Aided by adventurers, Eligor and the Brotherhood were able to capture the city and eliminate the Scarlet leadership including the then undead Valdelmar himself.[6] With this, the Scarlet Crusade definitely lost its hold over the city,[7] which came under the control of the Brotherhood of the Light.[8]

Some time later he appeared alongside several other members of the Brotherhood of the Light inside Stratholme to aid adventurers in retaking the Scourge-infested city. He also asked them to collect the painting

[Of Love and Family], hidden behind an Unfinished Painting of Azeroth's twin moons, placed inside the Scarlet Bastion in Stratholme by Artist Renfray. He explained that it's a painting of great personal value to Highlord Tirion Fordring.[9]

After the adventurers killed both Balnazzar and Rivendare on his orders,[10][11] Eligor appeared with a battalion of Argent Crusaders to aid in battling any remaining Scourge forces, thus taking control of the Scarlet Bastion and Alonsus Chapel, now under the control of the Argent Crusade, before announcing the start of cleaning of the city.[12]

Following the death of Tirion Fordring during the Battle for Broken Shore, Crusade Commander Eligor Dawnbringer was located in the Sanctum of Light, while not directly stated, as the representative of the Brotherhood of Light during the union ceremony of every paladin order on Azeroth into a restored Order of the Silver Hand. Occasionally, he can be seen speaking with Kelerun Bloodmourn.

Commander Eligor Dawnbringer is a member of the Brotherhood of the Light, a subsection of the Argent Dawn, and he manages to keep relations between the Scarlet Crusade from growing violent. He briefly met with Brann Bronzebeard.[13] 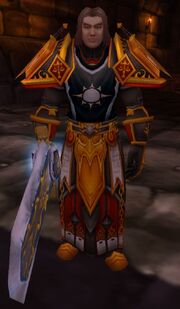 The Brotherhood of the Light transcends the ability of any other group to eradicate affronts to the Light. We will take any action necessary to rid the world of foul beasts like these undead. Nothing will stand in our way.

Are you with us, or against us?

I shall leave this image on display for your perusal. Study your opponents' strengths, for a creature's strength can also be its weakness.

Next, I shall speak of the accursed spider wing of Naxxramas. It is there that the Scourge breed even more poisonous and dangerous versions of their kin.
Anub'Rekhan, one of the finest Spider Lords of Azjol'Nerub, was brought under the control of the Scourge when he and his former commander, Anub'arak, were finally defeated by the Lich King many years ago. It is said that he was the most loyal of Anub'arak's commanders.
The Grand Widow Faerlina, a botanist in life, breeder and caretaker of arachnids in death, she oversees the spider wing, developing the most potent of poisons for the Lich King.
Maexxna, born deep within the mountains of Northrend many ages ago, she was captured within the dread citadel Naxxramas, where she gives birth to her brood, feeding them the corpses of all who dare venture too deeply into Naxxramas.

Next, I shall speak of the dread plague wing of Naxxramas, where the scourge seek to improve upon the deadly blight which they spread upon Lordaeron.
Behold, Noth, the Plaguebringer. Responsible for the creation of the process that distills the souls of the living and places them within the cold cage of undeath, Noth was observed to be refining this process even now.
Observe, Heigan the Unclean. The mastermind behind the plague cauldrons that turned the wilderness of Azeroth into the Plaguelands.
It is said that Heigan has rigged the very walls and floors of Naxxramas itself with a vast array of traps, which he can trigger at will.
Loatheb. The hideous result of fusing the living plague of the plaguelands with the bog beasts of Azeroth, Loatheb is said to control the power of healing itself.

Next, I shall speak of the blighted abomination wing of Naxxramas. There, the Scourge develop the strongest and most hideous aberrations of their armies.
Behold, Patchwerk. When word of his existence first reached the ears of the Brotherhood, none believed the tales of an abomination with such immense speed and strength. Fewer still believed it when he fell the first time...
Grobbulus, the first of what was to be an army of flesh giants. It carried the plague slime of Naxxramas within its body, injecting the living ooze into the bodies of its foe. The recipient of this foul injection would usually flee to his allies, bringing them down with him.
Gluth, the foul plague-dog of Naxxramas, was said to have an appetite so voracious that even the living were not enough to satisfy his hunger. Feugen was said to feed him an army of Zombies daily, recycling the remains of undead too weak to use in combat.
Thaddius, built from the flesh of women and children, it is said that their souls are fused together - eternally bound within that foul prison of flesh.

Next, I shall speak of the death knight wing of Naxxramas. Within its corrupted halls, the echo of battle rings day and night, as our finest warriors are corrupted and twisted into the Scourge's greatest warriors.
Pay attention. This is Instructor Razuvious, Kel'Thuzad's appointed trainer of all death knights. It is said that his own technique is so potent, only a disciple of his could possibly withstand his might.
Gothik, the Harvester. A master of necromancy and conjuration, Gothik is said to be able to beckon forth legions of the undead at a moment's notice. It is with his guidance that even the weakest of Death Knights can raise the dead.
The most powerful Death Knights within Naxxramas are the four horsemen. They represent the pinnacle of Kel'Thuzad's guard.
The first, Thane Korth'azz, holds the power of flame.
The next, Lady Blaumeux, calls forth the power of shadows, drawing the souls of the living into the voracious embrace.
Sir Zeliek, a paladin in life, so strong in his faith, that even in undeath, the power of the light still heeds his call, smiting his foes in battle.
The final Death Knight, Lord Mograine, was the finest warrior that the Death Knights had ever seen. However, after the events in Azeroth, he vanished without a trace. Kel'Thuzad has appointed Baron Rivendare in his place.

Next, I shall speak of the most powerful entities within the pinnacle of Naxxramas. Truly, these are two of the greatest threats to all of Northrend.
Mr. Bigglesworth. The last living creature in Naxxramas, this cat is said to be the last thread connecting Kel'thuzad to his mortal life. It is said that any who dare to harm a hair on his head doom themselves to... wait a second, what is he doing on there?
Commander Eligor Dawnbringer pounds on the display a few times.
Well, nevermind. I'm sure no one would be foolish enough to lay a hand on Kel'thuzad's precious pet.
Sapphiron. Once a noble blue dragon within the mountains of Northrend, Sapphiron was slain by Arthas during his campaign through the frozen north. Resurrected to serve him, Sapphiron guards Kel'Thuzad's lair eternally, awaiting those who would dare tresspass upon his master.
The Lich, Kel'Thuzad. He serves the Lich King without question, a necromancer of great prowess in life, turned to a master of necromancy after his death. It is said he is the most loyal of the Lich King's subjects.
Kel'Thuzad has survived trials that would have long since shattered the souls of even the greatest of the Brotherhood. He readily gave his life at Arthas's hand, later to be brought back - reborn in the power of the Sunwell.
In the plaguelands, Kel'Thuzad was again defeated by the agents of the Argent Dawn. However, his phylactery was delivered to a false agent of the brotherhood. We have yet to discover who stole his phylactery or why.

<The commander stops his lesson and turns, his eyes appraising you, sizing you up.>

I have use for one such as yourself, <class>.

We of the Brotherhood of the Light are not as lenient as our brethren when it comes to meting justice to those that would do this world wrong.

The Brotherhood of the Light transcends the ability of any other group to eradicate affronts to the Light. We will take any actions necessary to rid the world of foul beasts like these undead. Nothing will stand in our way. Are you with us, or against us? 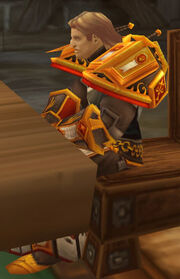 Watch your step, <race>. We of the Brotherhood of the Light are not as lenient as our brethren when it comes to meting justice to those that would do this world wrong.

Woe unto those who anger Korfax.

Now if you have no business with me or the other members of the Brotherhood, please leave so that we may continue our meeting.

What is Redemption armor?

The armor of Redemption was worn by our most pious knights - armor worthy of the Lightbringer himself!

Thousands fell in the last war; their vestments stripped from their corpses and taken to the dread citadel of Naxxramas.

It is said that the death knights of Naxxramas corrupt the Redemption plate mail for their own use.