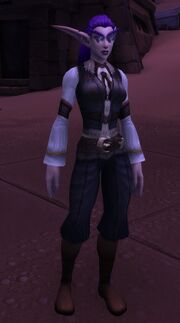 Elise Starseeker is a night elf member of the Explorer's League. She can be found on Mechagon Island. She makes an appearance at the Maker's Ascent in Uldum during the Assault in Uldum along with several other members of the league.