Emeni, the Slaughter Daughter, is a notorious abomination of Maldraxxus who secedes from the House of Constructs to join the Seat of the Primus during the Necrolords Campaign.

She is one of three soulbinds available to members of the Necrolord Covenant.

Emeni's soul as it appears before she receives her new body.

In life, Emeni was a powerful sethrak princess who—despite being born into an era of peace[3]—slaughtered hundreds of her siblings to claim the throne,[4] causing her to also be known as "the dread sibling slayer"[5] or "the kinslayer of Slithering Gulch". Her remains are buried at Skycallers' Spire.[3] After her death, her soul joined the House of Constructs in Maldraxxus and received a mighty abomination body, designed by Surgeon Stitchflesh and the stitchmaster Rathan within the Body Banks.[6] Dubbed the "Slaughter Daughter", Emeni became a legend[4] feared throughout the Shadowlands.[7] Her construct was of complex design[5] and possessed a skin impervious to mortal weapons, described by the princess herself as "a work of art that took years to perfect".[7]

Emeni, Rathan, and many other members of the House of Constructs spoke out against Margrave Gharmal when they launched their attack on Bastion. Fearing dissent, Gharmal removed Emeni and many other souls from their constructed bodies and imprisoned them in the Etheric Vault, leaving them to fade away from a lack of anima.[8][9] The skin of Emeni's construct was taken as a souvenir by the soul amputator Faldo Iscar.[7] While imprisoned, Emeni made a list of all the constructs that had betrayed her—58 in total, with number one being her fellow abomination Yardmaster Pralak.[10]

Despite being reduced to a disembodied spirit, Emeni managed to escape the vault and sought out the Necrolord forces at the Seat of the Primus alongside Rathan. Rathan promised that he and Emeni would build the Necrolords an army of constructs far greater than Gharmal's if the Maw Walker helped them reclaim the princess' body and rescue the other souls trapped in the vault.[8] The trio traveled to the Stitchyard and, after gathering the necessary tools from the nearby Construct forces,[11] (including reclaiming Emeni's skin from Faldo Iscar)[7] used the assembly equipment to build a new abomination for the Slaughter Daughter's soul to inhabit.[5][12] Now once again possessing a physical body, Emeni had the Maw Walker help her slaughter all of the traitors on her list[10] and rescue her friends from the Etheric Vault.[9] She, Rathan, and the freed souls subsequently took up residence at Butchers Block outside the Seat of the Primus, a place where they could construct more new bodies, and pledged their allegiance to Baroness Draka and her forces.[1][13]

Emeni participated in the joint kyrian and Necrolord attack on the Construct stronghold. She and Alexandros Mograine led the assault on the stronghold's western gate while Xandria and the kyrian advanced from the east.[14] At the Stitchyard, Emeni tasked Maw Walkers with clearing the skies of Margrave Gharmal's deathrocs by using her riding hook to latch onto them and beat them to a pulp in mid-air. She claimed that she would've taken care of the birds herself if it wasn't for the fact that her body wasn't constructed for flight.[15] 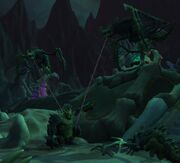 Emeni with two Battlesewn Rocs during the assault on the House of Constructs.

[60] Find The Way
Get me my construct body and I'll set this place right!

Sixfold Recluse and the Body Banks
When I get back in my body, I will level this place!

[60] At Your Service
I was royalty before I came here. It's fine if you bow.

During the Ember Court if Maldraxxian Army is chosen for security
Some in our ranks tell stories of fighting in this land in ages past.

I did not have that honor.

However, I am honored to be here now... and, if we aren't disturbed, perhaps I can find time to enjoy some delicacies.

I haven't seen such a court this side of the Shadowlands.

The only other sethrak known to use a royal or imperial title is Emperor Korthek of the Faithless empire. As such, Emeni and her siblings may be Korthek's younger siblings or children. Alternatively, Emeni may come from a previously unknown, extinct sethrak kingdom. The latter is possibly supported by The Legend of Emeni's description of her having been born into "an era of peace", which implies that she was born before the founding of the warlike Faithless.