The Emerald Dragonshrine is a green valley to the west of New Hearthglen, along the southern coast of Dragonblight. The green dragonflight's dragonshrine is the only dragonshrine to not be ravaged or under attack by the Scourge, this is due to the powerful seeds held by the Emerald Lashers.

Due to a misunderstanding by Ysera, when Nishera the Garden Keeper requested that she aid they other dragons against the Scourge, all the shrine's defenders will attack anyone not of the green dragonflight. Perched at the southern end of the dragonshrine lies Alystros the Verdant Keeper, it is he who is in charge of the dragonshrine's aerial defenses. By killing the skytalons, players would have angered him and will then have to deal with him as well so that he may be reborn, hopefully without the confusion the Emerald Nightmare has caused.

In the center of the shrine lies a transparent Ysera, the Emerald Queen, quietly sleeping. Like other dragonshrines, the ancient bodies of the green dragonflight's ancestors can be found here. 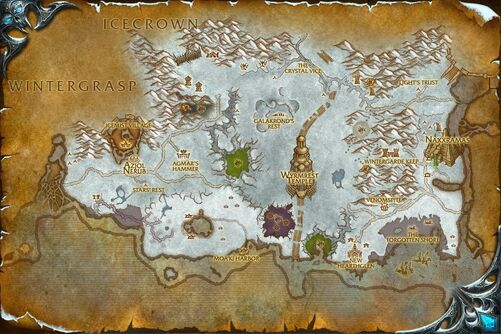 During the events depicted in the End Time instance, the dragonshrine is shrouded in a darkness of night, and time-twisted apparitions of night elves wander the shrine, including Echo of Tyrande.

At an undisclosed point in the future, the Emerald Dragonshrine comes under attack by the Emerald Nightmare. The satyr Thalas Vylethorn plots the death of Chronormu.