The Emerald Dreamway (or Ysera's Dreamways)[1] consists of a pristine glade shrouded in misty twilight within the Emerald Dream, and a Nightmare-tainted swamp full of corrupted beasts and twisted roots and vines that twitch in time with a distant heartbeat. The corruption from the swamp has begun to encroach into the surrounding woodland, threatening the Dreamway and its many portals into Azeroth.

The Champion of the Cenarion Circle helps Keeper Remulos fight the encroaching corruption as they clear a path to the Dreamgrove in Val'sharah. After establishing their class hall, they are able to traverse the Dreamway as needed, its many portals connecting to different natural locations across Azeroth.

On their way to Nordrassil to commune with the Wild God Malorne, the Druid hero and their allies discover the Dreamway under full assault by the forces of the Nightmare. Working with Mylune, Brightwing and the druids of the Dreamgrove, the hero once again drives the Nightmare out, clearing the path to Hyjal.

Resolved to rescue Malorne from the Nightmare, Remulos and the druids devise a way to reactivate the portal to the Rift of Aln that lies abandoned in a dark corner of the Dreamway.

During the Fourth War, Void minions invaded the Dreamway. Various green dragons defended the area, but Merithra of the Dream asked for help. Hoping to empower the Heart of Azeroth with the essence of the green flight, Kalecgos sent the adventurer to the daughter of Ysera the Temple of Elune in Val'sharah.[2] Merithra transported the hero to the Dreamway,[3] finding dead Drained Emerald Drakes. Among the defenders were Lord Itharius, Vethsera, Tryanikus, Valithria Dreamwalker, Kaithius, and Linisera while Thessera, Verdisa, and Karkarius succumbed to the Void. The hero defeated the majority of the Void attackers,[4] tried to rescue the trapped dragons,[5] and collected the fragments of coalesced green dragons' power.[6]

The Emerald Dreamway is only accessible to druids, except during the quest

Players first enter the Dreamway during the quest

[10-45] To The Dreamgrove. After completing the quest, players learn the spell

[Dreamwalk], allowing them to teleport to the Dreamway from anywhere in the world.

The Dreamway connects to a number of places powerful in Nature magic via a series of Dream Portals: 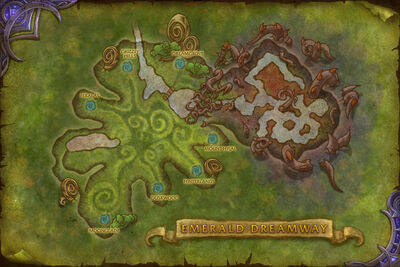 Sometime during the Broken Isles Campaign, the Dreamway is completely consumed by the Nightmare. In the Emerald Nightmare raid this is where the heroes of Azeroth face off against the Dragons of Nightmare on their way to confront Xavius at the Rift of Aln.

In its Nightmare-fallen state, many of the portals have been corrupted or choked off with Nightmare vines. Only four remain active, through which Ysondre and the nightmares of her fallen comrades intend to usher in the Nightmare to the waking world. 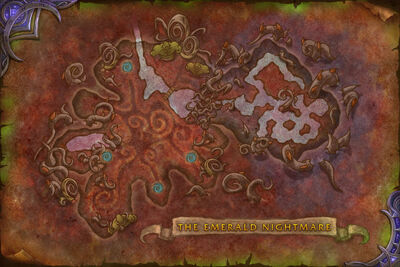