For the raid instance, see Emerald Nightmare (instance). For other uses, see Nightmare.

A corrupted world tree in the Emerald Nightmare version of Un'Goro Crater. 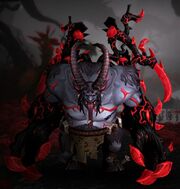 “I came upon what I can only describe as an overwhelming corruption within the Emerald Dream. An unending nightmare that seized me in its claws and tore at my very mind. I could not break free of its grasp; my disciples were unable to wake me.”

The Emerald Nightmare (or the Nightmare for short) is the name given to the Old God corruption of the Emerald Dream. When the Nightmare spreads, it consumes the life force of all it touches. The more it spreads, the weaker druid magic becomes.[1] It is a realm of death, decay, and nightmare.[2]

During the War Against the Nightmare, it was revealed that the Emerald Nightmare was under the rule of a figure known as the Nightmare Lord, who in fact was really Malfurion Stormrage's old nemesis Xavius. However, it was also revealed that Xavius himself was a minion of a powerful yet ancient evil, residing in the Rift of Aln, and possibly also beneath Azeroth's oceans.[3] Despite the defeat of Xavius and the removal of much of the nightmare through the course of Stormrage, the noting of a still-corrupted area indicates that the Nightmare is still a threat. Its influence is slowly overtaking the forests of Val'sharah through the World Tree Shaladrassil during the events of Legion.

The Nightmare acts like a heavy shroud, warping reality, altering the perception of all living things,[4] and bending the boundary between reality and dream.[5] None are immune to the Nightmare's corruption,[6] and it has been known to take hold of former Dragon Aspects, demigods and even demons. When a mortal has become corrupted by the nightmare, there is no return. Only death will set them free,[7][8] although Elune's power in Tyrande Whisperwind's presence has seemingly cleansed or resisted its corruption to varying degrees on several occasions, such as with Eranikus, Elothir and Ysera.[9][10] Once cursed, the nightmare will begin consuming the victim's thoughts and filling their head with the voices of other corrupted beings, even the nearby flora.[11] The curse itself, however, is known to make the victims very, very powerful, rivaling even that of ancients.[12]

The origins of the Nightmare stretch back to 4,500 years before the First War, when a small group of druids led by Fandral Staghelm took branches from Nordrassil, the World Tree, and planted them over saronite that had begun to appear across the world. The five first branches grew into Great Trees, while the last and greatest branch—planted over the largest source of saronite in the Grizzly Hills—became the World Tree Andrassil. Unfortunately, Andrassil's roots went deep enough that they touched the prison of the Old God Yogg-Saron, corrupting the tree and spreading madness throughout the nearby wildlife. The druids sorrowfully destroyed the World Tree, believing that this act would halt Yogg-Saron's corruption. What they did not know, however, was that Yogg-Saron had used the trees planted by Fandral to open the way for the Old Gods to access the Emerald Dream. The Old Gods spread small seeds of corruption throughout the dreamways, gradually polluting the Dream and marking the beginning of the Emerald Nightmare.[13] While Yogg-Saron was the Old God who opened the Emerald Dream to its brethren, N'Zoth later became the one who took the most active role in its corruption.[14]

The Dragons of Nightmare in Legion

During the opening of the Gates of Ahn'Qiraj, a satyr which preached the Nightmare's power was situated in Duskwood.

A destroyed Thunder Bluff in the Emerald Nightmare version of Mulgore

The Nightmare found a way into one of the wings of the Stormrage Barrow Dens where strange creatures of nightmare suddenly came into the waking world. The Cenarion Dreamwarden were constantly trying to keep the threat at bay. Plantlife was thriving here, but this was not the case in the Emerald Dream. Clintar Dreamwalker could be found asleep in one of the rooms and he was part of the quest chain for

[Swift Flight Form]. It seems Anzu was behind these attacks.

While on the Icecrown quest

[80] Hope Within the Emerald Nightmare, Remulos sends the player into a phased version of a portion of Moonglade to gather [Emerald Acorns].

During the Valithria Dreamwalker encounter she opens portals to the Nightmare, where the player can find dream clouds.

The Nightmare Scar in the Barrens

During the events of the War Against the Nightmare, the Emerald Nightmare was almost able to take hold of the whole Emerald Dream and Azeroth at the same time trapping most of the most powerful heroes of the world in sleep reliving their nightmares.

However, the Nightmare Lord was eventually defeated with the help of a coalition of races, stopping the crisis.

Despite Xavius' defeat at the hands of Malfurion Stormrage and his allies, the Nightmare was not entirely destroyed following its master's defeat. One small part stubbornly stayed in the Rift of Aln, and Malfurion could only seal off the vicinity around the rift until a time that another war would be in their favor.[15] Xavius's spirit was also sealed inside the Rift of Aln.[16]

The Emerald Nightmare is present in the Nightmare Scar, located at the center of the regrown area of Southern Barrens known as the Overgrowth. The Nightmare's influence in the Barrens following the Cataclysm suggests that the evil controlling the Nightmare may have taken advantage of the Shattering to attempt to infect Azeroth once again.

Taerar still plagues Feralas from the portal at Dream Bough, and Ysondre is trying to stop him for good.

The Nightmare is present in the dream around the Hyjal Barrow Dens, trying to prevent Fandral Staghelm's transfer out of the prison.

During a meeting of the Wyrmrest Accord, Merithra notes that the Nightmare is stirring within the Rift of Aln and seems to be seeking a new Nightmare Lord to replace Xavius. However, Ysera says it is now the duty of the druids to watch over the Emerald Dream as she has become mortal following the Hour of Twilight.[17]

The Emerald Nightmare is revealed to be still active, with its source being located at the tainted World Tree, Shaladrassil in Val'sharah at the Broken Isles. Xavius has been revealed to have re-established his ties to the Burning Legion and attempts to use the Nightmare to corrupt the world, while his satyr underlings roam the tainted glades of Val'sharah.[18] However, his true loyalties remain with the Old Gods.[19]

After Xavius is killed, the Emerald Nightmare begins to dissipate and the Emerald Dream is restored. However, a small remnant of void remains in the form of a flower. A shadow priest with

[Xal'atath, Blade of the Black Empire] will hear it state that the Nightmare was almost completely removed, but that the Rift of Aln is deep and vast and that the Old God's prison is weakening. The Nightmare still holds a grip on areas of the Dream, as seen in the Deaths of Chromie.

At an undisclosed point in the future, but before the end of the Fourth War,[20] the Emerald Dragonshrine comes under attack by the Nightmare. The satyr Thalas Vylethorn plots the death of Chronormu.

True to Xal'atath's words, the Nightmare has survived the death of Xavius, at least in a form. It was most prominently discovered by an Alliance adventurer and the Order of Embers during the investigation into the Drustvar region of Kul Tiras. There, the ancient enemies of the Kul Tirans and former rulers of the island, the Drust, and their king Gorak Tul were discovered to have survived destruction at the hands of Kul Tirans centuries ago by escaping into a death realm they called 'Thros, the Blighted Lands'. Though unknown to them, and to the Alliance, this was, in fact, an off-shoot of the Emerald Nightmare.[2]

Later, while the Alliance adventurer worked with Katherine Proudmoore to discover Jaina's location, they found that she had been pulled into Thros. Though the two succeeded in freeing her from the dark realm, and fend off Gorak Tul once more, the Blighted Lands appear to still persist.

Additionally, during the Alliance and Horde's ongoing struggle over Darkshore, Gren Tornfur seems to be wielding the power of the Nightmare in the form witnessed in Legion.

During the fight against Ra-den the Despoiled, Essences of Nightmare and Night Terrors are fought.

While in her wildseed in Ardenweald, Ysera was troubled with nightmares. When the Maw Walkers were working on helping Ysera, nightmare manifestations such as Disturbed Nightmares appeared.[21]

The corrupted environment and beings take the colors black, gray, red and violet in their appearance.

The Emerald Nightmare was created using the twisted thoughts and fears of sleeping beings' subconscious minds to corrupt the Emerald Dream. The Nightmare travels slowly through the Dream, leaving corrupted, vicious animals and Unwaking travelers in its path. Many druids were called to the Emerald Dream to help fight back its effects. The green dragons did what they could, though they dared not risk becoming themselves corrupted. The Eye of Ysera had not yet been approached by the Nightmare, but some feared that one day it will.[23]

The Emerald Dream is not a place of total perfection. It can be shaped and twisted by dreams, usually without a sleeper's knowledge. Sadly, nightmares are themselves a crafting of the subconscious and have given rise to their own place within the Dream. The Nightmare, as the denizens call it, is not a specific location, but a constantly roaming effect that travels about unpredictably. The skies above the Nightmare are constantly clouded, creating a gloomy, depressing zone that weakens and deadens everything it touches. The beautiful green vegetation is twisted into brown decay, while ordinarily peaceful creatures are corrupted into shadowy, mutated versions of themselves known as Corrupted Ones. The Corrupted Ones are vicious and cruel, hunting anything they can, even after they leave the Nightmare's affected zone.

Worse still, some dream-travelers who enter the Nightmare — or are engulfed by its movements — become trapped in the Emerald Dream. They cannot leave, so their bodies back on Azeroth remain in a permanent sleep, slowly starving to death unless tended by helpful aides. While trapped, they are known as the Unwaking; they are also corrupted and will do anything to get back home. The Nightmare is believed to be slowly growing in size and power.[23]