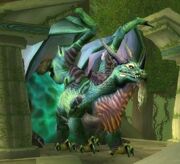 Emeriss in World of Warcraft.

In recent times, Ysera's most trusted lieutenants had been warped by a dark new power within the Emerald Dream. These wayward sentinels passed through the Great Trees into Azeroth, intending to spread madness and terror throughout the mortal kingdoms.

The mysterious dark power within the Emerald Dream transformed the once-majestic Emeriss into a rotting, diseased monstrosity. Reports from the few who survived encounters with the dragon told of horrifying tales of putrid mushrooms erupting from the corpses of their dead companions. Emeriss was truly the most gruesome and appalling of Ysera's estranged green dragons.[1]

During the War Against the Nightmare, Emeriss was one of the major antagonists as a servant of the Nightmare. She and Lethon attacked Eranikus in order to corrupt him, but thanks to Alexstrasza, the corrupted dragons were forced to retreat. When Tyrande, Broll, Lucan and Thura were flying on a green dragon in order to leave the Dream, Emeriss attacked them, though the group was able to get to Azeroth.

Emeriss later returned to battle Tyrande and Malfurion, but Tyrande attempted to remove Emeriss's corruption with the power of Elune. However, the dragon was so far gone that there was nothing left to heal, and she was simply disintegrated. Tyrande remarked that, "...there was nothing left but the corruption... and when I tried to heal that... it left only emptiness..."

Emeriss and the Dragons in the Emerald Dream.

When Ysondre is taken by the Emerald Nightmare once again, the corrupted spirits of her deceased comrades join her in the Emerald Dreamway, including Emeriss. After the defeat of Xavius, Emeriss's spirit along with the spirits of the other three former Dragons of Nightmare are seen in the restored Emerald Dream.

Emeriss appears as a legendary card for the hunter class in the The Witchwood expansion for Hearthstone. Her flavor text reads: "Taste your world's corruption! It tastes like chicken."