Emperor Vek'lor is one of the two Twin Emperors, the other being Vek'nilash.

Little is known about the Twin Emperors, except the fact that they created several powerful entities to serve as commanders of their armies, active in the War of the Shifting Sands.

They oversaw the construction of the first Anubisaths in the ever-burning fires beneath Ahn'Qiraj, a task that would take millennia to complete. A thousand years ago the Emperors commanded an assault on Kalimdor, putting General Rajaxx in charge of unleashing their new soldiers upon the night elf sentinels. Fandral Staghelm was able to counter the Anubisaths with the aid of the Bronze Dragonflight. A problem the Emperors had to deal with. Emperor Vek'lor focused his efforts on designing a mechanism capable of fighting the ancient wyrms, but the hard work was futile, until his dark master's whispers aided him in creating the Obsidian destroyers, Vek'lor himself hammering out the first statue in a molten forge beneath the Ruins of Ahn'Qiraj. These constructs, along with a single extraordinarily powerful Anubisath called Ossirian the Unscarred turned the tides, forcing the remaining dragonflights to join in on the war, finally trapping the Emperors and their army inside Ahn'Qiraj behind the Scarab Wall.

In preparation for its reemergence in the world, the shadowy master of Ahn'Qiraj commanded Emperor Vek'lor to create a new obsidian statue superior to all other destroyers. Vek'lor sought his twin brother's aid in the task, and while Vek'nilash used his physical might to craft a grand body of volcanic rock, Vek'lor fortified the shell with powerful magic. Emperor Vek'lor named the finished construct Moam, they intended to use it as a colossal weapon, knowing that its strengths would help it survive in the thick of melee as well as magical combat. They observed as their dark master infused it with life. He was pleased and surprised to find that the improved obsidian destroyer was far more versatile than its earlier counterparts. 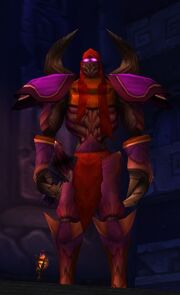 Enrage
You will not escape death!