Emperor Vek'nilash is one of the two Twin Emperors, the other being Vek'lor.

Little is known about the Twin Emperors, except the fact that they created two powerful entities to serve as champions of their armies.

In preparation for its reemergence in the world, the shadowy master of Ahn'Qiraj commanded Emperor Vek'lor to create a new obsidian statue superior to all other destroyers. Vek'lor sought his twin brother's aid in the task, and while Vek'nilash used his physical might to craft a grand body of volcanic rock, Vek'lor fortified the shell with powerful magic. Emperor Vek'lor named the finished construct Moam. They intended to use it as a colossal weapon, knowing that its strengths would help it survive in the thick of melee as well as magical combat, and observed as their dark master infused it with life. He [who?] was pleased and surprised to find that the improved obsidian destroyer was far more versatile than its earlier counterparts.

Emperor Vek'nilash gave a gift to Ossirian to honor his assault on Grakkarond. He bound Ossirian's essence to several ancient crystals of distant origin, which would grant him near invulnerability.

The legends say that Vek'nilash secretly entrusted Ossirian with the responsibility of maintaining a watch on General Rajaxx, to ensure that the commander would never fail again. 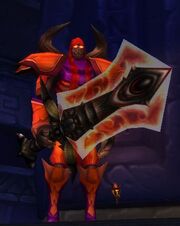 Enrage
Your fate is sealed!

Death
Vek'lor, I feel your pain!