“ Hope is not lost, Highfather. The spark of life still flickers within these mortals. Arise, champions! Fight to save your world!”

Eonar the Life-Binder is the titan patron of all life and nature.[3] 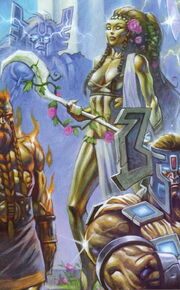 Like the other members of the titan Pantheon, Eonar was born from a world-soul somewhere in the Great Dark Beyond and aided the Pantheon in its ordering of the universe.

When Sargeras, Champion of the Pantheon, relayed his discovery of the void lords' plan to use the Old Gods to transform a world-soul into an incomprehensibly powerful dark being, he urged the other titans that the only way to save the universe was to completely scour it of corruption. He argued that since life had taken root in the cosmos once before, perhaps it would do so again. Horrified by this idea, Eonar reminded Sargeras that the Pantheon had sworn to protect all life when possible, and that nothing could be so dire that it would require systemic extinction of all living things.[4]

Some time later, Aggramar, who had taken Sargeras' place as defender of the Pantheon, discovered an extremely powerful world-soul slumbering in a distant corner of the Great Dark. Unfortunately, it was being corrupted by the Old Gods. When he returned to the Pantheon with this information, he urged his fellow titans to save the world-soul, which would later become known as Azeroth. Eonar was quick to side with Aggramar, and she managed to convince the other titans that were this new titan to grow to maturity, it would be strong enough to neutralize the void lords once and for all; but more than that, Azeroth was their sibling, and they could not let a member of their own family fall into the clutches of the Void. The Pantheon were moved by the Life-Binder's words, and agreed to take the fight to the Old Gods.[5]

As the titans' colossal forms made it nearly impossible to take action directly without severely harming the nascent world-soul, instead the Pantheon decided to craft an army of servants — the titan-forged — to do battle in their stead. Each member of the Pantheon imbued a number of these servants with their specific powers and likenesses; Eonar gave Keeper Freya command over Azeroth's flora and fauna.[5] After the defeat of Galakrond, Eonar channeled her power through Freya and into Alexstrasza and Ysera, gifting them respectively with powers over life and the Emerald Dream, transforming them into the noble Dragon Aspects; Alexstrasza herself would be known as the greatest of the dragons, as well as the Life-Binder, and her red dragonflight would fight to protect and safeguard all life just as Eonar had.[6]

Like the rest of the Pantheon, Eonar's spirit was launched into the Great Dark by Norgannon during their confrontation with Sargeras, as their physical form was obliterated by the Dark Titan, near the world of Nihilam.[7] The spirits slammed into the Keepers of Azeroth.[8]

Eonar's spirit apparently traveled to Elunaria, where she remained hidden from Sargeras and the Burning Legion for millennia. After the Burning Legion finally discovered and invaded her refuge, the Elarian Sanctuary, Sargeras seeking to use Eonar's gifts of nature and growth to make his Legion unstoppable, she reached out to Magni Bronzebeard, the Speaker of Azeroth's world-soul, asking him to save her from their overwhelming forces.[9]

After the Legion is successfully repelled, and the other Pantheon members liberated from the Legion's clutches, Eonar reunited with her long-lost brethren at the Seat of the Pantheon, and assisted Azeroth's heroes against Argus the Unmaker. When Argus killed the heroes near the end of the fight, she managed to revive them by summoning a massive tree called the Gift of the Lifebinder. After Argus is finally defeated, Sargeras struck out at Azeroth and wounded her heavily in Silithus. Immediately thereafter, the Pantheon combined their powers with the last remnant of Argus's essence, and imprisoned him within the Seat of the Pantheon, Eonar personally helping end his Burning Crusade against all life. Illidan Stormrage, who stayed behind while his comrades left, serves as Sargeras's jailer. 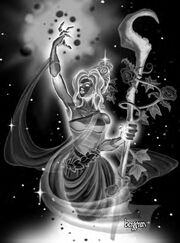 This enormous, bronze-skinned woman has a gentle expression at odds with her obvious physical and magical strength. She carries a crooked, alabaster staff, and flowers blossom at her feet.[10]

Eonar is a female Vanir titan. Her classes are Healer and Druid of the Wild.[11] She wields a staff named Seschenal.[10]

Eonar is the physical representation of life, nature and healing in the universe; she revels in the joy and bliss in all worlds. She is Aman'Thul's consort, and had a long, bitter feud with his brother Sargeras before the latter's fall from grace; her presence and personal strength exacerbated the conflict between Aman'Thul and his dark brother. When the Burning Legion first assaulted Azeroth, Eonar combated the demons by infusing the world's native dragons with the power to battle the Legion. She bequeathed a portion of her spirit to the red dragon Alexstrasza, who remains a potent life-giving force on Azeroth.[10]

Eonar's portfolio includes nature, healing, life and, as she is a member of the Pantheon, creation and order. Dwarves and others who respect the titans revere Eonar, if they know of her. Azeroth's red dragons pay her special homage; they honor her memory by constantly battling chaos and destruction.[12]

Before portal to Elunaria
Magni Bronzebeard yells: Champions! I heard a familiar voice callin', so I fought me way inside this accursed place.
Image of Eonar yells: Champions, hear me. The Legion has breached my sanctuary, and my defenses will soon be overrun. Stand with me now, lest Sargeras claim his prize.
Magni Bronzebeard yells: It's Eonar, the Life-Binder! This portal leads ta her sanctuary. Go, I'll stay here and cover yer backs!

Some aspects of Eonar's character and powers appear to be based upon the Greek goddess Demeter, the sister of Zeus who presided over agriculture and the harvest.