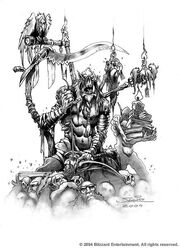 The epic necromancer is a dark champion of the dead and vile bane of the living. Their undead creations terrorize the land while they ravage their opposition with twisted magic. The living fear their name and the dead flock to it. The epic necromancer lives and dies by their spellcasting powers and their ability to command, create, summon and control undead. They improve these abilities even further, making sure their minions can defend them. They use most of their ability increases on their primary spellcasting ability — intelligence or charisma. Dexterity and constitution are their second choices.[1]