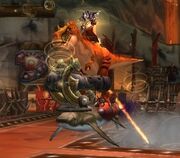 Epicus Maximus in the Brawler's Guild.

Epicus Maximus is a legacy encounter in the Brawler's Guild and requires the use of a challenge card to fight.

The party is composed of:

The trio can also be seen flying above the water wall on the northwestern edge of Nazjatar, north of Bloodfin Village and west of the Zanj'ir Terrace. They circle a large area that is mostly out of bounds, but they periodically fly close enough to the edge of the water wall to be seen by players.

Interrupt Blue Crush, kite around the Destructolaser, and don't stand in the Pure Rock'n Roll.

This encounter, like most in the Brawler's Guild, has a two minute enrage timer, so 87.2KDPS will be required for victory.

Epicus Maximus, the Paragon of Epicosity, originally appeared in the Cataclysm beta, circling above the Maelstrom in front of Thrall and Aggra. The shark-dinosaur-Forsaken combination was added in response to a forum thread in which beta testers complained that the area wasn't epic enough. Lead World Designer Alex Afrasiabi initially replied to the thread with:

Maybe I missed the memo on levels of "epicosity" or something, but I'm pretty sure the Maelstrom is a CLASS 10 epic zone. Though I guess it is missing sharks with laser beams patrolling the waters and Arthur Fonzarelli jumping across it with water skis. And dinosaurs.

A few hours later, Afrasiabi returned to the thread to announce the addition of more epicness to the zone:

After reading this post I called for a meeting with TOP TOP MEN (that's two tops) in order to figure out a solution to the problem at hand. Frankly, I think we hit a home run. The next 4.0 build (or the one after) should have a Maelstrom that's between 10 - 50x more epic than what currently exists.

Buckle yourselves into your computer chairs or face being blown away!

Epicus Maximus was added to the Maelstrom in the following beta build. The trio was removed before Cataclysm went live but made a cameo in the Uldum zone, where the

[Holographic Projector] used to subjugate some cursed engineers will sometimes display the trio and play some epic background music.

An official mousepad of the Epicus Maximus trio illustrated by Greg Capullo was produced by SteelSeries for sale exclusively at BlizzCon 2011.[1][2]

Product description: Have Epicus Maximus, the mythical creature from the Cataclysm Beta, beneath under the palm of your hand! This epic-sized gaming QcK+ mousepad from SteelSeries will be premiering at this year's BlizzCon, available only while these supplies last. Guaranteed to be a collector's item!