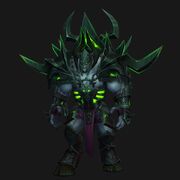 Eredar brutes are a sub-type of eredar who undergo a ritual that twists their bodies into an even more brutal form. They are some of the eredar's greatest warriors, and even Illidan advised to take caution around them because of their power.[1]

Khazaduum was the first of them, created when the eredar first joined the Burning Legion. A most faithful servant of the Legion, Khazaduum volunteered to undergo an experimental transformation to become the first of his kind, a horrific transformation granting him strength unlike any known to the eredar at the time. His arrival was the end of the battle against the future draenei during their exile.[2] On Argus, more can be seen being created at the Stasis Core.[3]

Warlocks can summon one through the