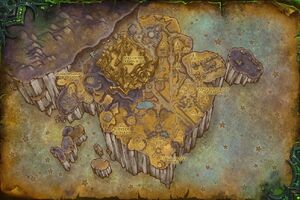 Descend to Eredath with Velen.

The shattered ruin below us is all that remains of Eredath.

We called it the Jewel of Argus. It was here that my fellows in the triumvirate guided our people to prosperity. That was a long time ago.

<Velen lapses into a moment of silence.>

Join me on the surface. We will begin our search for the Crown of the Triumvirate.

It is as if the battle never ceased. How long have they suffered like this?

Quest accept
Prophet Velen says: Come, I need to see it for myself.
Velen uses the teleport system to leave the Vindicaar.

Grand Artificer Romuul
Eredath... it looks just like how I remember it. The forests, the hills, the herds of talbuk...

I wonder if my old workshop is still down there. Do you think if you had a moment, you could...?

Forgive me. You have much more important things to do. Let me know when you are ready to go to the surface.

You are teleported down at the right side of Velen.

Velen
<Velen stares straight ahead. He doesn't seem to notice you have arrived.>

Cutscene
Velen's memory of the day that he and his followers fled from Argus plays out...
Hatuun says: Talgath has turned against us!
Standing beside Velen, Hatuun points out Talgath down the slope in the distance, leading an army of man'ari eredar towards them.
Velen says: No...
Hatuun says: It cannot end like this. Take the others and go, Prophet. We will buy you time.
Hatuun leaps down as Velen protests in alarm.
Velen says: Hatuun! You do not have to do this!
Hatuun lands with four armored guards. He stands and looks back up over his left shoulder to Velen.
Hatuun says: Please... keep my family safe.
While Hatuun and the guards keep the eredar forces at bay, Velen brings out a crystal.
Velen says: K'ure! Help us!
A dimensional ship, the Genedar, appears in the sky. Velen and the rest of his followers are pulled to it as the eredar forces eventually catch up. Kil'jaeden, newly turned man'ari, walks to the front and looks up at Velen.
Kil'jaeden says: I will hunt you across the stars, traitor! Even if it takes a thousand years!