This article is about the zone underneath the Maelstrom in the RPG. For other uses, see Eye.

The Eye is a sub-aquatic region located in the South Seas, at the center of the Maelstrom, northwest of the Broken Isles. When the Well of Eternity exploded at the end of the War of the Ancients, it created the Maelstrom: a magic storm that lashes the waves with wind, rain and raw magic power, and its center was named the Eye. There is not much on the surface (besides an ancient whirl of arcane energy), but beneath the waves, on the ocean's floor, dark secrets await, as well as giant sea monsters, underwater volcanoes and thermal vents.[1]

The naga control the Eye, dominating it from their capital city of Nazjatar. The makrura also inhabit the Eye with the city of Mak'aru being the center of their civilization. They hate the naga and are their sworn enemies, Unfortunately, they don't seem to care much for outsiders of any kind, no matter their intentions.

When Brann Bronzebeard visited it, he said he saw more forms of life in the Eye than he imagined existed in all the world, because he saw creatures that defied categorization as they seemed more like alien organisms from other planes than simply animals native to Azeroth.[2]

The Eye was once the Kaldorei capital of Zin-Azshari, which means "Glory of Azshara". It played a key role in the War of the Ancients, for it was the site of the Well of Eternity and of the Burning Legion's first invasion of Azeroth. When the Well exploded during the Sundering, Zin-Azshari shattered and sank, and the Maelstrom was created. The city ruins are now scattered throughout the Eye.[1][3]

For as long as the eastern and western continents have existed, the Maelstrom has made sea travel between the two difficult. Both the Horde and the Alliance lost numerous ships to the Drowned Reaches during the exodus to Kalimdor. In addition, during Thrall's expedition, he was shipwrecked on one lone island not far from the Maelstrom, somewhere in the South Seas. It was here that he met the Darkspear trolls and saved them from zealous murlocs, thereby enlisting them as members of the Horde.

In a desperate gamble, the Alliance is planing to outfit hundreds of their best and brightest with the magic and technological items necessary to survive underwater. With the help of some allied makrura, they plan to stage an attack on Nazjatar. However, the attack would simply be a distraction in order to allow a small group of adventurers to enter the city, steal into the palace, overcome Queen Azshara's defenses, capture her, and return her to the surface. The Alliance plans to either siphon the captured queen's arcane powers or use her to enlist the help of the naga against the Scourge.[3] 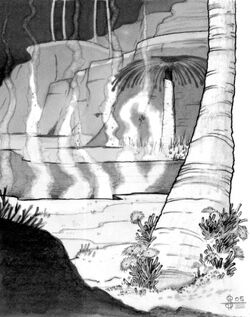 On the surface, the Eye is a vast arcane storm swirling with magical power, the Maelstrom, which creates a great vortex beneath the waves, forming a massive whirlpool that leads into the depths of the Eye, drawing in ships and creatures foolish enough to get too close. The Maelstrom also creates a wall of swirling water, nearly impassable, beneath the surface thus accessing the Eye is no mean trick.[1][2]

The ocean floor is volcanic and undersea volcanoes belch magma and steam into the water. Thermal vents release strange gases, which manifest as large bubbles that rise toward the surface. Natural life thrives around these vents, devouring the nutrients released from the world's core. Seaweed, fish and more bizarre creatures — pale, eyeless worms and spiderlike crabs with eyes on stalks, among others — appear in profusion. In addition to these harmless creatures, the Eye is home to water elementals, octopi, sharks, hydras, threshadons, frenzies and giant squids. Surprisingly, it seems there are no murlocs or mur'guls in the Eye. It is presumed that either the naga slay any murlocs they find here, or the dim creatures are sharp enough to steer clear of this place. As for mur'gul, perhaps the naga consider their capital too sacred to allow their slaves access.[2]

Further within the center of the Eye, the Rift is located, which is all that remains of the Well of Eternity. It goes deep down into Azeroth's core, allowing magma from the depths to rise up. The naga capital of Nazjatar is built into its walls.

The Pillar Deep is located to the northeast of the Eye, and the Gishan Caverns to the north. To the southeast there is the Boiling Terrace, and in its southeastern edge lies the Drowned Reaches, which holds the remains of all the ships that have been dragged into the gigantic whirlpool. Oppositely, on the southwestern side of the Maelstrom and around the perimeter of the Eye, lies the Scintal Reef, which encloses the makrura city of Mak'aru.[4] 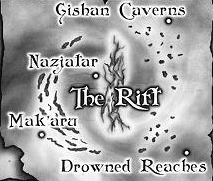 Map of the Eye.