Not to be confused with Queen Azshara or Azshara.
This article is about the non-instanced zone. For the 5-man dungeon located in Azsuna, see Eye of Azshara (instance).

The Eye of Azshara is zone south of Dalaran in the Broken Isles. It is a level 110 elite zone that is a replica of the dungeon of the same name. A flight master can be found here, but even with a level 100 boost, you need to unlock it by visiting the flight point. This area is occupied by 110 elite mobs that are the objectives of

[110REWQ] Hate the Hatecoil. A rare elite C'Thrax called Kosumoth the Hungering also spawns here once his attunement is completed. The world quest to kill it rewards the

[Fathom Dweller] mount or the

No quest ever leads the player to the zone, so it needs to be reached manually. Having the

[Emerald Winds] to glide down from Dalaran can get one there. There is a flight path for subsequent visits.

Map of the Eye of Azshara. 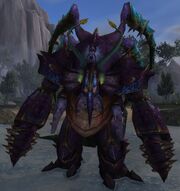