For other uses, see Eye. For the mission in Warcraft II: Beyond the Dark Portal, see The Eye of Dalaran (WC2 Orc). 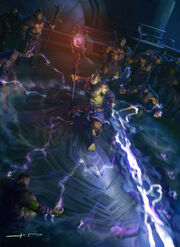 The Eye of Dalaran being used by Ner'zhul to cast the Spell of Conjuration. 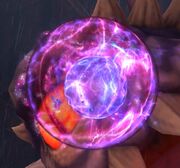 The Eye of Dalaran. 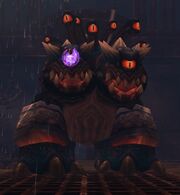 The Eye of Dalaran is a device that was created by the mages of Dalaran to focus their magics in an effort to reconstruct the Violet Citadel. The elder shaman Ner'zhul, warchief of the Horde of Draenor, ordered his minion Teron Gorefiend to invade the city of Dalaran, steal the Eye and return with it to Draenor. Ner'zhul used it alongside other artifacts to open dimensional rifts to countless worlds.[1]

Teron Gorefiend traveled to the city of Dalaran, where the mages had built heavy fortification. He destroyed the shoreline defenses,[2] then he and his death knights broke into the Arcane Vault of the Violet Citadel, and stole the Eye. They killed Sathera and escaped atop the back of Deathwing and some of his black dragons. The Eye was delivered to Ner'zhul, and used to open the rifts that ultimately destroyed Draenor due to their unstable nature and the sheer number of them across the entire planet.[3]

Khadgar retrieved the Eye once Ner'zhul had opened the rifts, and he gave it to a Wildhammer dwarf under Kurdran, along with the Skull of Gul'dan. The dwarf was ordered to return the artifacts to the safety of Azeroth. As the dwarf passed through the collapsing portal, his screams of agony could be heard by the members of the Alliance on the Draenor side of the portal.

The Eye of Dalaran never made it back to Azeroth and was consumed by a void terror named Occul'tharon inside the Twisting Nether. It was retrieved from Occul'tharon at Tol Barad by Allaris Narassin and the Sixth of the Black Harvest on orders from Gul'dan, who intended to use it alongside the

[Scepter of Sargeras] and the Book of Medivh to open portals to every single Legion world in existence.[4] While the ritual was stopped and the Scepter was retrieved from Gul'dan,[5] it is unknown whether the Eye and the Book were also retrieved.