The Faction Assault on Drustvar is part of the Faction Assaults on Kul Tiras. Drustvar, a territory of the Alliance, is the traditional seat of the Waycrest dynasty, and provides significant resources to the Kul Tiran military, making it a strategic target.[3]

In response to the initial Horde attack, the Alliance would dispatch the Light-blessed Purified led by Vindicator Ralgala to defend the area and its people. Most of the fighting would be in western Drustvar, and ultimately center around Arom's Stand, with the Alliance fortifying the position against a Horde aerial bombardment and siege.

The assault on Drustvar was concurrent with other Faction Assaults by the Horde and Alliance across Kul Tiras and Zandalar, in the wider context of the ongoing Fourth War. Strategically, the darkened region of Drustvar was known to contribute a large amount of ore and manpower to the Kul Tiran and Alliance war effort,[3] and had only recently recovered from a major internal struggle against witchcraft. Despite this, King Genn Greymane judged the Horde's attack to be overextending its forces, despite its boldness.[4]

The invasion was spearheaded by a Horde gunship under the command of Kaldras Snape, which stationed itself not far from, and began a bombardment of, Arom's Stand. Other Horde forces, including the Honorbound, targeted further parts of western Drustvar. To defend against this threat, the Alliance would dispatch a force of Light-blessed troops known as the Purified. Including many Lightforged draenei from the Army of the Light, the Purified also brought to the battle unique assets such as warframes and Lightforged artillery.

As fighting erupted throughout the area, Horde forces closed off the roads leading to Arom's Stand, creating a stand-off surrounding the settlement. Purified forces established small outposts and camps in the field; in many of these they would open portals back to Stormwind City to keep a steady supply of reinforcements flowing in as the battle progressed.


At the Purified marshaling grounds in southern Arom's Stand, the blood elf Death Knight known as Duchess Fallensong the Frigid personally attacked the Alliance defenders. Wielding powerful frost magic, she presented a serious threat to the defense of the area, and was selected for elimination by General Shandris Feathermoon.

At the southern perimeter of Arom's Stand, the Purified gathered a large amount of heavy artillery brought by the Army of the Light. To deal with this threat, Horde saboteurs covertly infiltrated the grounds with the intent of undermining these defenses. Alliance agents, armed with the Hide-No-More 2000 device crafted by Gebish Togglebot, worked to reveal and root out any Horde within the perimeter to save the Lightforged batteries.

Goblin Beast Wranglers land on the mountain side of Drustvar and a manage to enslave a wendigo named Muk'luk by using a domination helmet. Shandris sends adventurers to deal with it.

At the Teller Farm northwest of Arom's Stand, Honorbound Horde forces occupied an area near the road and began attacking Alliance troop movements. At some point, however, the orc contingent fell victim to a fungal infestation from the nearby Ashenwood Grove, with many of the soldiers becoming feral from being overgrown by the spores. In response, Grumbol Grimhammer would dispatch Alliance agents to cleanse the farm and drive out the entire Horde presence, infected or otherwise.

At a small bridge just south of Corlain, the Zandalari troll known as Zul'aki the Headhunter led a small group of Darkspear troll warriors in waylaying road traffic. Killing townspeople on the road and burning supply wagons, the trolls also battled Purified Protectors who arrived the stop them. Zul'aki himself would ultimately be targeted for assassination by the Alliance champions on the orders of General Shandris Feathermoon.

Engineer Bolthold along with several Goblin Lumberjacks land in the forests of Drustvar. From his Shredatron-2000, Bolthold began gathering lumber for the Horde. Sergeant Calvin sends an adventurer to deal with him.

Both the Alliance and Horde would push into Arom's Crossing in order to harvest the rich source of Azerite present there for the war effort. Even before this current invasion, the Horde had maintained an Azerite mining operation at the Crossing's west, which had been contested by the Alliance.[5]

Please add any available information to this section.
... 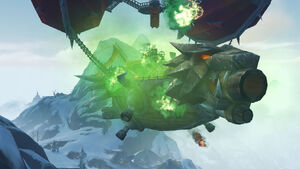 The Horde gunship is destroyed

After dealing with the Horde presence on the ground, the defenders then turned their attention to the gunship stationed in the skies above Arom's Stand. In addition to bombarding the Alliance garrison, the airship also carried a large quantity of the Forsaken New Plague, with the Horde intending to unleash this weapon on the entire region. To counteract this, King Genn Greymane ordered a direct attack on the gunship itself, with Alliance champions boarding the vessel from the air by gryphon and overseen by Falstad Wildhammer.

Once on board, the Alliance attackers detonated the arsenal of Plague bombs scattered throughout the ship, as well as eliminating the captain, Kaldras Snape, and Lifter Machock. They then proceeded to escape the gunship by gryphon once again, as the explosions from the Plague bombs ripped the vessel's structure apart.