“The fal'dorei were elves once... Now they are monsters, birthed in the chaotic energies of the failing arcan'dor. They must be eradicated.” 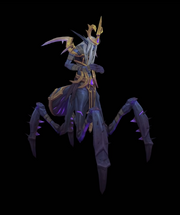 The fal'dorei are a race of former elves found in Suramar. Many years ago, exiles from Suramar City came to Falanaar. Valewalker Farodin took pity on them and gifted them with an arcan'dor tree. For a time it sustained them and they were safe, but it did not last forever. The arcan'dor became unstable and died, and in a flash of wild magic the elves were twisted into spider-like creatures, becoming the fal'dorei.[1] Now they live in the tunnels beneath Falanaar and were after the arcan'dor seed protected by Farodin. The fal'dorei intended to use its power to return to the surface.[2]

Fel-corrupted fal'dorei can be found in the Cathedral of Eternal Night, in the service of an aranasi, Nal'asha.

This section contains information that needs to be cleaned up. Reason: It looks like a mess