Fanlyr Silverthorn is a blood elf encountered on Pandaria. He directs members of the Reliquary in the Vale of Eternal Blossoms and Kun-Lai Summit, and travels as part of Lor'themar Theron's retinue to various other points of interest. 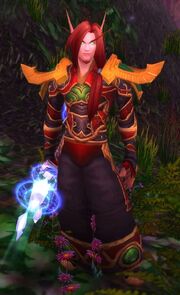 Fanlyr was sent by Garrosh with a blood elven expedition to the Ancestral Rise in the Vale of Eternal Blossoms where the expedition found Mercurial Guardian. After the Guardian was defeated, Fanlyr learned information on the

[Divine Bell], and informed Garrosh of it. He was also part of the blood elven force sent to Kun-Lai Summit and survived the mogu ambush; later, Fanlyr joined Regent Lord Lor'themar Theron on his trip to the Valley of the Emperors and pleaded with Garrosh not to slay a captured mogu warlord, so he could be taken in for questioning. Garrosh stayed his hand but threatened to put Fanlyr's head on a pike outside Orgrimmar should he disrespect the Warchief again. He was then seen in the Imperial Mercantile in the Shrine of Two Moons and in Garrosh'ar Advance while Garrosh was interrogating Shan Kien.

Under orders from the Warchief, Fanlyr traveled through a portal conjured by a Silvermoon Mage to transport himself and Horde champions to Darnassus, where the Alliance had hidden the Divine Bell. After stealing the Divine Bell, Fanlyr sent it to Silvermoon and ordered his companion(s) to go through the portal while he covered their tracks. However, despite his best efforts, Jaina Proudmoore discovered that someone was able to circumvent her wards and later went on to expel the entire Sunreaver organization from Dalaran.

It is unknown what happened with him afterwards.

The Divine Bell means a great deal to the Horde.

The Warchief is counting on us.

Whether Fanlyr was an official member of the Sunreavers or not is unclear. He spends most of his time quite overtly commanding the Reliquary throughout the campaign, and refers to the Sunreavers as "they" rather than "we" when discussing "their" involvement in the Divine Bell operation. A misconception is that Fanlyr was the one who conjured the Sunreaver portal to Darnassus, though this is incorrect: a nameless Silvermoon mage with the Sunreaver tabard channeled the portal Fanlyr (and the player) took to breach the city's wards, while Fanlyr himself was more of a liaison for the player.

He provided a charm which was referred to as Silvermoon Charm and Sunreavers' Portal-Charm.

During the trial of Garrosh Hellscream, Anduin Wrynn described the theft of the bell. He said that a Sunreaver agent, acting on orders from Garrosh, stole the artifact with several other Horde members,[1] although he may had gotten this information from a biased Jaina. Nazgrim referred to Fanlyr as an agent in

[90] Insertion but not as a Sunreaver agent.