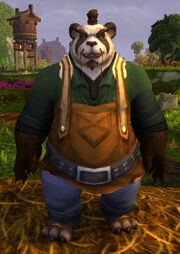 Farmer Fung is a pandaren farmer in the Valley of the Four Winds and a Tiller.

Fung has a rather disagreeable nature, of which the young cubs describe as "pretty mean". Gina Mudclaw states more tactfully that her knowing him is "unfortunate". Her sister Tina, on the other hand, is attracted to him for some reason, although she is later torn between him and Farmer Yoon. What ever the opinions on his personality, most would agree that he is one of the best farmers in the Valley of the Four Winds. Fung later hints that one family secret is the use of fertilizer.

[Wildfowl Roast]. Fung's family consider themselves to only excel at two things: growing giant vegetables and raising prized shagskin yaks. Once the player becomes best friends with him, Fung gifts you with Shaggy, one of the family's shagskin yaks, who will hang out inside the animal pen at Sunsong Ranch.

Fung can be seen on the Timeless Isle speaking with Shokia. 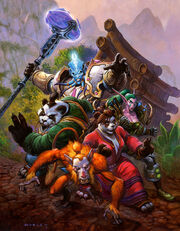 Farmer Fung in the short story The Untamed Valley.

After Haohan Mudclaw and Mung-Mung rescued Lyalia, Maraad and their prisoner Mashok from the virmen, farmer Fung joined them for supper at the Haohan house. When the Dark Shaman attack in order to free Mashok, Fung aids in the defense and suggests that Mung-Mung rides Thunder into battle against their attackers. When Mashok, who was freed from his chains gained the upper hand against the defenders Fung was able to get Mashok to explode that not even carrots would grow when he was done causing Hooktooth and the rest of the virmen to attack the orc.[1]

Farmer Fung grows the biggest vegetables in the Heartland!

Fung sends you a letter with the

A Letter From Farmer Fung

Now that we are best friends, I'd like to give some gifts. You know the Fung family is known for their prized yaks, so I'm giving you one of my best animals! Take care 'o Shaggy, okay?

Now have you tried to grow Enigma Seeds yet? The beauty of these seeds is that once they're grown, they'll sprout into just about any herb you've ever seen on Pandaria!

If you're real lucky, you might even get a rare Golden Lotus.

Inside the seed pack is one

And you know who's got the best fertilizer in the Valley? Me!

And you know who's got the best fertilizer in the Valley? Me!

Listen, I don't say this to just anyone, but if you ever need a yak, you let Fung know.

You gotta tend them. Give them some water, some fertilizer, and some love.

Best Friend
Now that we're neighbors, I've decided to give you the best gift a neighbor can just about give to anybody! I'm going to give you one of my prized yaks! I'll swing on by later and leave 'er in your pen.