Fel reavers cover ground with incredible speed, due to their long legs and an internal power core that is "powered by a scalding core of fel fire" that "burns much hotter than normal fire",[1] and cannot be fueled by nether gas.[2] They also seem to have a Heart of some kind that 'beats'.[3]

It is said that the cunning mo'arg engineers of the Burning Legion pushed their gan'arg workers for weeks in the construction of the first fel reaver, a massive construct that could easily raze fortified towers or tear the wings off an airborne gryphon. The forge camps then began to mass-produce these fel reavers to smash the mortal forces of Outland.[4]

Currently not much else is known about the reavers' construction or origin beyond that. The Burning Legion uses them as sentinels all around Hellfire Peninsula, including around their forges to the north (Rage and Mageddon) to oversee the work on their cannons. Much of what is known about fel reavers comes from observing the Fel Reavers in Hellfire Peninsula, which patrol around the region, killing unprepared travelers that wander within range.

Two locations in Hellfire Peninsula are based around ruined fel reavers. Reaver's Fall, in eastern Hellfire Peninsula, is the location of remains of a destroyed fel reaver, with a handful of trolls, orcs, and tauren cheering and dancing around the fel debris. At this area, players can execute bombing runs against the legion front. Another area, Expedition Point, is near the gateways of the Legion. It is also built around fel reaver parts that are being forever hacked away at to bring to Stormwind City in order to be melted down and remade as weapons to use against the Legion.

There are inactive fel reavers parked at Forge Camp: Terror and Forge Camp: Wrath in the Blade's Edge Mountains. Some are also parked in Forge Base: Oblivion and Forge Base: Gehenna in Netherstorm. Also in Netherstorm, a Scrapped Fel Reaver can be found in the Heap, and Doctor Vomisa, Ph.T. built a Scrap Reaver X6000. Legion Hold Fel Reavers can be found inactive and undergoing some sort of charging/construction process in Shadowmoon Valley, and players can control a Fel Reaver Sentinel at nearby Invasion Point: Cataclysm. Parts of fel reavers can be found in many Forge Sites around Outland, but few have actually been produced.

Shadowsword Guardians, a type of fel reaver, can be fought in Sunwell Plateau.

The Iron Reaver, the plans for which was found in the workshop of Siegecrafter Blackfuse following the Siege of Orgrimmar, was inspired by the fel reavers. The project was completed after his death to serve the Iron Horde,[6] but was later retrofitted to use fel energy.

In the last moments of his life, Varian Wrynn destroyed a gigantic fel reaver, in order to release the Skyfire from its grasp, knowing full well he would be trapped with the demons in front of the Tomb of Sargeras.

Many fel reavers were the product of Kin'garoth, the engineer of the apocalypse. 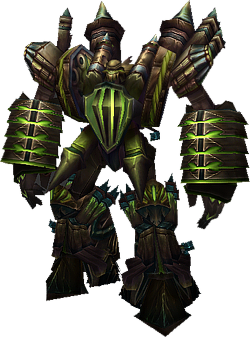