The felblood elves[1] (or felbloods)[2][3] are an offshoot of the blood elf race that — like fel orcs before them — have been corrupted by the Burning Legion.

The felblood elves are a group of Kael'thas Sunstrider's most loyal followers, who were rewarded by Kil'jaeden with the gift of being allowed to gorge themselves on demonic blood for days for remaining in Outland, even as many of his blood elves retreated through the Dark Portal.

Felblood Initiates remain behind at the Throne of Kil'jaeden in the Hellfire Peninsula where they feast on siphoned fel energy from Suspended Terrorguards, though many are counted amongst Kael's invading forces on the Isle of Quel'Danas. There, a felblood named Selin Fireheart can be found in the Magisters' Terrace, while a force known as the Shadowsword resides in the Sunwell Plateau — appearing to be responsible for the capturing of M'uru from the secret chamber beneath the Blood Knight headquarters. 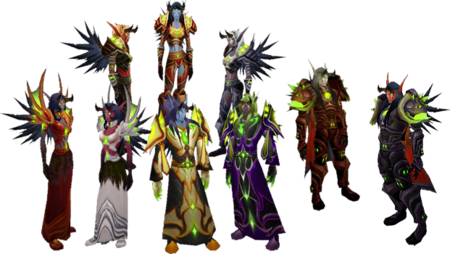 In addition to bearing runic tattoos, they have developed various demonic features, such as unnatural skin and hair colors, horns, and what appear to be small, black-feathered wings — as well as cracks and openings in their skin, which reveal green fel energy glowing from within. Their cuspid teeth are prominent and drape idly out of their mouths during speech, giving them a vampire-like appearance. Unlike the Wretched, who lose most of their hair, felblood elves seem to bypass this aspect of corruption.