Felo'melorn,[1] Flamestrike in Common,[1] is an ancient Highborne runeblade borne into battle by the Sunstrider dynasty. It was once wielded by Dath'Remar Sunstrider, even before the War of the Ancients.[1] This powerful and storied runeblade, passed down through the Sunstriders for generations, is a mighty weapon said to harness the very essence of flame.[2]

Felo'melorn is one of the artifacts used by fire mages in World of Warcraft: Legion. Equipping it will automatically place

[Heart of the Phoenix] in your off hand.

According to rumors passed down through generations, a young Dath'Remar dreamed of the weapon Felo'melorn. In that dream, the arcane blade burned like the sun and dispatched so many enemies that it created a swift-flowing river of blood. Dath'Remar would later recount the specifics of the blade's appearance to the renowned magesmith Luminarian as he crafted the weapon on his arcane forge. When Dath'Remar joined the Kaldorei Resistance, he fought against the demons of the Burning Legion with Felo'melorn in hands. The weapon brought hope among the night elven defenders. Eventually, it became legendary and known as the sword of kings and the bane of trolls.[3] Even today, some night elves in the Broken Isles recall its power, with a Lorlathil Sentry and several Nar'thalas Nightwatchers still remembering the legendary weapon from the War of the Ancients.

Felo'melorn was eventually passed down to Dath'Remar's great-grandson, Anasterian Sunstrider, who wielded it against the Amani trolls after the founding of Quel'Thalas.

Among the trolls, whispers spread of a spellbound blade, empowered by arcane magic not only to slay the most formidable and cunning of its enemies but also to cut through superior numbers and irrigate battlefields with their blood. Troll witch doctors set about casting hexes and curses against the infamous weapon, but history bears out that even the darkest voodoo did little to negate the effectiveness of Felo'melorn during the Troll Wars.[3] It was said that a thousand Amani trolls fell before Felo'melorn's fury,[4] spilling enough Amani blood to brim the walls of Zul'Aman.[5]

During the Scourge invasion of Quel'Thalas, Anasterian wielded the sword in battle against Arthas Menethil, and grievously wounded the death knight's steed Invincible with it. Towards the end of their battle, Felo'melorn and Frostmourne clashed, but the former was severed in two on collision. Although Anasterian fought on with his broken blade, burying it deep in Arthas' thigh, he was ultimately defeated.[5][6] The shattered blade was recovered and returned to Silvermoon City, along with the fallen king's body, by the brothers Solanar and Falon. Later, Kael'thas Sunstrider, last of the Sunstrider line, had Felo'melorn reforged, "with magic, hatred, and a burning need for revenge"[7] and stronger for the breaking.[8]

It was last seen when Arthas engaged Kael in a duel during the final battle between the Lich King's Scourge led by Arthas Menethil, and Kil'jaeden's agents led by Illidan Stormrage. Kael boasted that unlike human blades, which weakened when repaired, elven blades grew stronger when remade; this proved true, much to Arthas's surprise, when the runeblade was able to parry Frostmourne without failing. Though Kael ultimately fled, the sword was lost there.[9]

After the betrayal of Kael'thas Sunstrider to the Burning Legion, Lyandra Sunstrider--a distant relative that held no actual claim to the throne--decided to find Felo'melorn. According to Aethas Sunreaver, she became obsessed with finding it. At an unspecified point, she disappeared. She apparently found the blade in the Icecrown Citadel[3] only to be killed and raised there as a member of the Scourge by the Lich King. By the time Aethas, Modera, and the new leader of the Tirisgarde decided to track down Felo'melorn, she had apparently been missing for years, but also given the arcane blade by the Lich King himself, to aid in the battle against the Burning Legion.[3] The Lich King let the mage's presence and told them he would not interfere but neither would he protect them from the Scourge.

She is ultimately killed once more by the mage and Aethas, and the old elven runeblade thus falls into the hands of the reformed Tirisgarde to combat the Legion, the very group that its former owner had eventually sworn allegiance to.

Once the war against the Legion was won, Felo'melorn's power was used alongside the other artifact weapons to siphon the malignant power from the Sword of Sargeras.

When adventurers raided Castle Nathria to rescue the soul of Kael'thas from Sire Denathrius, Kael's wrath took the form of a burning copy of himself wielding a red facsimile of Felo'melorn. 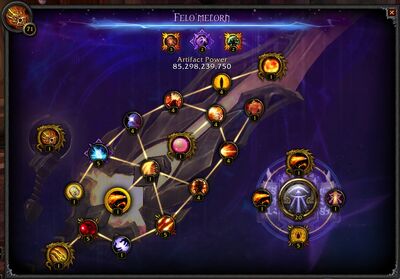 Hidden trait: Certain NPCs will ask to examine the blade, granting Artifact Power when you allow them to do so. In addition, corpses of enemies you kill will sometimes be left charred and smoking.

Upgraded: Pride of the Sunstriders

Certain NPCs will react to the mage wielding Felo'melorn, asking to examine the blade and granting 50 Artifact Power.

Flamestrike is a large double-edged warblade, etched with elven runes of power.[10] It is rumored to have once been Dath'Remar's favored weapon, and over many generations was passed down through the Sunstrider dynasty. Flamestrike grants its wielder an increased chance to hit, increased damage, and an increased chance of scoring a critical hit. It adds fire damage to every attack (more so on a critical hit) and also allows its wielder to cast the flame strike spell five times per day.[11] It remained in the possession of Kael'thas Sunstrider.[10]