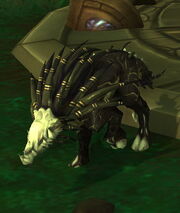 Felstalkers are vicious demonic beasts, and a recently discovered variation of the felhound.[1] Unlike the vampiric felhounds, who use their long tentacles to drain the magic and life force from their enemies, the faster and more coordinated felstalkers focus more on being pack hunters,[1][2] utilizing a crude form of pack communication[1] and mainly using their teeth and claws to inflict physical attacks. Some felstalkers are still capable of devouring magic, but need to charge up before doing so, allowing opponents time to get out of their limited range,[3] while others have infectious and disease-ridden bites laced with "all sorts of foul magics".[1]

Some felstalkers have been broken by the Illidari for use against the Burning Legion.[4] Demonology warlocks can also summon dreadstalkers, some of which are ridden by imps.[5] It was always a wonder to outsiders how certain vrykul warlocks managed to summon and command enormous packs of felstalkers.[6]

Felstalkers were first seen in Tanaan Jungle in patch 6.2.0.