For the lore of the zone and its status after the Cataclysm, see Felwood.

Felwood, aka Felwood Forest,[1][2] [3] is a contested zone located north of Ashenvale, east of Darkshore, and west of Hyjal and Winterspring. It is a corrupted forest filled with tainted creatures of the woods, demonic satyr and infernals, rotting treants and ancients, as well as the tauren and night elves who try to battle back the sickening of the land. It is also home to one of the two tribes of pure furbolgs left in the world — the Timbermaw.

This lush and vibrant land of woods and meadows was tended by the kaldorei and protected by Cenarius. Bubbling streams ran through quiet, grassy meadows, and the summer sun was tempered by the whispering breeze and the cooling rain. The leafy corridors of the forest rang out with the music of songbirds. It was as close to a paradise as the world has ever known. Then the Burning Legion befouled the land using The Skull of Gul'dan. Any trees and creatures that escaped the outright destruction became forever cursed in the demons' rampage. Known to have felt the cursed touch of the Burning Legion, Felwood is an eerie, dark, and haunted region of scattered gloomy woodlands and tainted vales, all of it teeming with evil. The meadows of Felwood retain the sickly, charred look they took on when the demons cursed the land during the third war. Nothing grows there. The mighty ancients that once guarded the land now roam blindly, their limbs twisted and their bark hides bleeding fel poisons. The once tranquil rivers and streams now boil with poison and noxious gases.

Felwood is a dismal and dangerous land to all who enter. Most cross into Felwood only out of necessity, for it lies directly along the road to Hyjal Summit. Armed travelers are usually safe if they pass along the main road by day, but they have no guarantee of safety if they leave the trail or if they venture into Felwood after nightfall. The night elves feel constant shame that they failed to protect this noble land. All their efforts to restore health to the woods and meadows through divine magic have failed. Despite the lingering curse of The Skull of Gul'Dan, the night elves refuse to cease in their efforts to lift it. Some think that the key to healing the blighted land lies with Illidan, brother to the night elf hero Malfurion Stormrage. Illidan was known to have consumed the Skull of Gul'dan, which also blighted the forest. Only powerful divine magic can likely save the land, however.[4]

Alliance
From Astranaar in Ashenvale, head east to the point where the road branches to the north. Take the north fork into Felwood. Along the road, the Cenarion Circle have set up a camp with a flight path available.

Horde
From Splintertree Post in Ashenvale, head west to the point where the road branches to the north. Take the north fork into Felwood. Along the road, the Cenarion Circle have set up a camp with a flight path available.

Felwood has no villages or people of its own. It is home to no cities to speak of; the night elves fled the area thousands of years ago, and no one had found the ambition to settle in the cursed forest since. The land was a cursed relic, a danger to all within its bounds. Even creatures united in evil are not safe from the depredations of one another. Explosions and flashes of arcane brilliance erupt throughout Felwood as druids clash with the warlocks they have come to destroy. The ground shakes from the footsteps of accursed ancients who prowl in search of victims. Twisted furbolgs and satyrs range through Felwood in bloodthirsty packs, and savage beasts lie in wait for the unwary. Felwood is home to many beasts, with bears, wolves, and panthers the most numerous. As herbivores refuse to eat the cursed vegetation, the carnivores have turned to feeding on each other. Combined with the great curse, this development has created in each creature a brutal rage - a rage that the beasts turn on one another and any who dare to enter their territory. Cursed furbolgs roam the forest, looking for an end to their torment. They are hardy enough to survive drinking the cursed waters of Bloodvenom Falls, but the water only increases their madness.

Cursed ancients lurk near night elf ruins and will attack anyone they see. They are stronger than their healthy counterparts, empowered by evil. The ancients hold a special grudge against the night elves who abandoned them and will unleash special savagery upon anyone remotely resembling an elf. Satyrs dwell by tainted moon wells, their dark magics twisting Felwood’s curse ever deeper into the land. Rumors circulate that the shadowy satyrs work as scouts and assassins for the Shadow Council in Jaedenar. The undead Scourge and what demons survived the Third War have also made a home in Felwood. These recent arrivals have stirred the other residents into turmoil, making the region even more violent than before. Druids of the wild make forays into Felwood with the aid of elven rangers, hunting down the greatest evil they can find and attempting healing magic upon the land. High elves and paladin warriors have likewise come to Felwood to cleanse it of undead and root out the reclusive Shadow Council.[5]

Although no large villages or major cities exist, Felwood is not entirely abandoned. The furbolgs and satyrs of Felwood have small encampments, and the Alliance, the Horde, and the druids of the Cenarion Circle have set up an outpost, an encampment, and a homestead in order to try to cure the woods and provide travel through the area.

There are no dungeons or battlegrounds of any kind in this area. 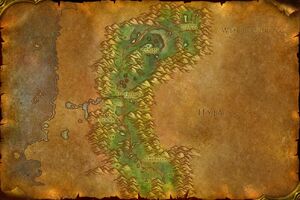 Felwood is home to several characters of note. At Bloodvenom Post, Trull Failbane seeks aid in uncovering secrets from the wildkin of Winterspring. At the Emerald Sanctuary, Greta Mosshoof attempts to cleanse the taint that has affected Felwood by fighting back the evil satyr. And deep in Shadow Hold, Lord Banehollow, the lord of the Shadow Council, awaits bold adventurers who dare venture into his lair in search of power.