For the lore of the zone and its status after the Cataclysm, see Feralas.

Unlike its barren neighbors to the north, south and east, Feralas is a lush jungle. Both the Horde and the Alliance lay claim to the area and both factions have to contend with powerful local forces, which include, most notoriously, the bloodthirsty Gordunni ogres which populate the region and control a number of ancient Elven ruins scattered in the area, including the vast dungeon of Dire Maul. Gordunni ogres have desecrated and defiled much of Feralas and have damaged the land with their taint. The Horde, in particular, is concerned with the unchecked expansion of the Gordunni clan and has put out a call for adventurers to aid the war effort against the Ogres. Feralas is also home to a number of scattered Grimtotem tauren tribes, members of which are hunted by Horde agents on the orders from Belgrom Rockmaul in Orgrimmar. In addition the far western islands are crawling with Naga and recently several Silithid hives have been spotted in the region.

Once part of the great expansion of Night Elf power, the forest of Feralas holds many ancient ruins as well as the great city now known as Dire Maul that have long since been overgrown by the native plant life. One possible explanation for its abundant flora and fauna could lie in the fact that Kalimdor was once nothing but lush forests prior to the Great Sundering. It is likely that the high mountains that surround the area served as a protective barrier from such outside factors.

Alliance
Alliance may find some trouble getting into the zone. Adventurers can travel south from Nijel's Point in Desolace, but then you will have to pass between the Twin Colossals which is full of beasts 47-50, and heading directly to Feathermoon Stronghold. Alternatively, they can travel west from Thalanaar but you will encounter the Horde town: Camp Mojache which can also be tough to pass. The easiest way for Alliance adventurers is water route. From Nijel's Point they can go west and after passing by Thunder Axe Fortress and Ethel Rethor jump to water in Sar'theris Strand. From there is high possibility to swim without encountering any mobs. Swimming on that route adventurer should avoid the pier in Shadowprey Village. After passing it by there is straight and mobless water route to Feathermoon Stronghold.

Horde
From Freewind Post travel north west along the main road until you enter Feralas. You will pass by the Alliance outpost of Thalanaar that you must avoid. Shortly into the jungle is the town of Camp Mojache. There is a flight path there.

Feralas is a large rainforest of huge, ancient trees stretching from Thousand Needles to the coastline in the west and from the wasteland of Desolace in the north to the lush Un'Goro Crater to the south.

Dire Maul, ancient ruins now populated by ogres, is an instanced dungeon which can be found in this area. There are no raid dungeons or battlegrounds here, but there are multiple micro dungeons. 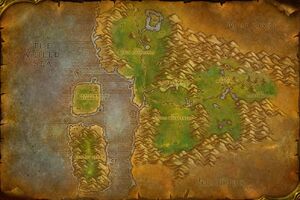 Feralas is home to several characters of note. At Thalanaar, Falfindel Waywarder seeks aid in the battle against the Death's Head cult. In Feathermoon Stronghold, Shandris Feathermoon attempts to cleanse the taint that is the naga led by Lord Shalzaru. And at Camp Mojache, Witch Doctor Uzer'i sends bold adventurers into the deepest parts of the jungle in search of mystical muisek. Kindal Moonweaver requires help to free Sprite Darters being help captive by Grimtotem tauren.