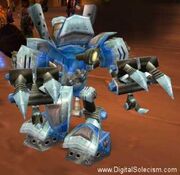 Field Repair Bot 74A is an Engineer-created robot that can be deployed anywhere. The item is consumed upon use. It essentially functions as a merchant with a repair ability: it can both completely repair gear and purchase items from players. It also sells minor Engineering components. It lasts for 10 minutes and there is a 10 minute cooldown on the robot so you can only deploy one at a time.

It was considered to be one of the most important engineering items in the game, especially useful for repairing entire raid groups without having to leave a dungeon.

This item is crafted with Engineering (300); taught by Schematic: Field Repair Bot 74A.

Instances introduced in later expansions have often featured shorter distances to repair vendors, making repair bots less vital. They are still a high value convenience item, as simply leaving to repair and return can take 5–10 minutes of a raid's time under optimal conditions. This particular repair bot is the first generation of such items, and has since been eclipsed by versions made available with later expansions.