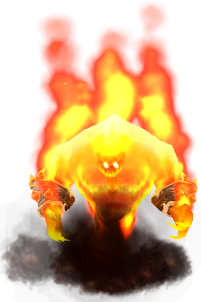 Fire elementals are elemental creatures made of fire. On Azeroth, they are led by the Firelord Smolderon, and their domain of the Elemental Plane is called the Firelands.

To keep Azeroth safe from these threats, the titans imprisoned the Old Gods underground and banished the savage elementals to the titan-constructed Elemental Plane, a secure dominion where the elementals could dwell without harming Azeroth. Four domains were created within this primordial realm to serve as ideal environments for each type of elemental. One of the Elemental Plane's domains, a molten domain known as the Firelands, is home to the fire elementals. With the elementals' departure, nature calmed, and the world settled into a peaceful harmony.[1]

War of the Three Hammers

Around three hundred years ago the ambitious and ruthless Dark Iron clan initiated a war against their dwarven brethren, the Bronzebeard clan and Wildhammer clan. During this War of the Three Hammers Thaurissan, seeking to summon a supernatural minion that would turn the tide of the war back to his favor, called upon the ancient powers sleeping beneath the world. To Thaurissan's surprise, and ultimately his doom, the creature that emerged was more terrible than any nightmare he could have imagined. Now, freed by Thaurissan's call, Ragnaros erupted into being once again. Ragnaros' apocalyptic rebirth into Azeroth shattered the Redridge Mountains and created a raging volcano at the center of the devastation. Many Dark Iron dwarves remain within the lower areas of the mountain, especially Blackrock Depths, toiling away at the behest of Ragnaros and the Firelord's lieutenants. He and his dwarven minions took control of the Blackrock mountain's volcanic depths and made war on the orcs in the Upper Blackrock Spire, which served as the seat of power for Nefarian the black dragon. Ragnaros has uncovered the secret to creating life from stone and plans to build an army of unstoppable golems to aid him in conquering the whole of Blackrock Mountain.

During the First War

The creation of a simulacrum of the elements of fire. While these servants can be constructed and controlled by powerful mages, many have proved too difficult to hold in the summoner's power. Should they escape their creator these creatures rage uncontrollably, determined to destroy all those who are like the one that imprisoned them in this domain.[2]

While their watery brethren fall under the domain of the Humans, these creatures serve no other. They only seek to destroy anything or anyone that they come in contact with. No one knows if these are summoned beings, or the result of some rogue magiks. The only sure thing is that they are deadly, and seem to take some dark pleasure in the pain they inflict.[3]

During the Third War

Over time human wizards learned how to call back the Elementals through the art of summoning. The Firelord is one of these liberated Elementals. Consumed by hatred for all organic life, he roams the world he once called home, sewing chaos, wreaking vengeance, and inflicting pain with extreme prejudice.

The Hydraxian Waterlords led by Duke Hydraxis were Water elementals that made their home on the islands east of Azshara. Duke Hydraxis revealed that the Elementals of Water are seeking to do battle against the other elements, and were willing to let mortals prove themselves to be worthy of fighting one of their grandest enemies, Ragnaros the Firelord and his servants in the Molten Core.

Following Deathwing's Shattering of the World Pillar in Deepholm and his destructive re-emergence into Azeroth, the Elemental Plane collided with the physical realm and resulted in drastic geographical upheaval, causing chaotic elementals to pour out into the world of Azeroth. With the world still reeling from the disaster, Ragnaros and his minions have made it their goal to set aflame the World Tree Nordrassil, one of the remaining symbols of healing in the shattered lands of Azeroth. In the ensuing conflict, many brave heroes gave their lives to protect Hyjal from destruction. By their noble sacrifices, the impossible was achieved: the Guardians of Hyjal pushed Ragnaros's minions back into the Firelands.

Now, the battle to protect Hyjal rages in Ragnaros's smoldering realm. As territory is gained and Azeroth's champions edge closer to the Firelands' inner sanctums, a monumental task lies ahead. Entrenched around Ragnaros's lair -- Sulfuron Keep -- are his most trusted guardians, including the turncoat Druids of the Flame and their mysterious leader.

As a shaman pet

Shamans are able to summon an elemental totem that calls forth a greater fire elemental to rain destruction on the caster's enemies.

They are beings formed of blazing flames held together to create the appearance of a muscular humanoid torso. Black metal bracers encircle the thing's arms, and its torso trails off into a fiery tail. Fire elementals are beings of hate and cruelty. They enjoy causing pain. Fire elementals ignite all that they touch and consume the air around them. Fire elementals prefer close combat, where they can set their opponents alight and take no damage from the resulting blaze. They initiate combat by suffocating to weaken their enemies before engaging in melee. Cunning foes, fire elementals lure their opponents into dangerous areas, such as dry forests the elemental can set alight. Fire elementals are intelligent enough to attack only those who seem easy targets, and they usually flee when the battle turns against them.[4]