Fists of the Heavens

The Fists of the Heavens,

[Alra'ed], are the artifacts used by windwalker monks in World of Warcraft: Legion.

Thousands of years ago, the famed tol'vir smith Irmaat crafted a pair of magnificent handblades. Unsatisfied with his work, Irmaat tried to capture the essence of Al'Akir the Windlord to infuse into his blades. Al'Akir was not amused. To spite the smith, Al'Akir poured unspeakable amounts of raw elemental fury into the handblades. When Irmaat attempted to unleash their might, a great vortex sprang up, engulfed his city, and scattered the weapons to the winds.[1]

The Fists of the Heavens were originally created by the famous tol'vir blacksmith Irmaat. The weaponsmith was skilled in creating magical instruments of war for the Titans' creations in Uldum, believing his hands to be extensions of the titans' will. Despite his great skill, he was prideful and sought to create the ultimate and most unstoppable weapon of all using

[Elemental Air]. He bound the four djinn of the Conclave of Wind into four scimitars of great power, yet he was unsatisfied. Convinced that he could bind Al'Akir the Windlord himself in a pair of fist weapons, he used a ritual to steal the elemental lord's power from his home in Skywall. Iramaat believed he had done the impossible and named the two fist weapons

[Alra'ed], the Fists of the Heavens.

But Al'akir was cunning, and anticipated Iramaat's prideful attempt to steal what he could not control, having learned from the imprisonment of the Conclave. The Windlord indeed gave Iramaat's weapon his power, but filled them with such chaotic energy that when Iramaat attempted to wield them, he and the surrounding city were annihilated in a storm of raw elemental fury. Any other tol'vir who attempted to take up Irmaat's weapons suffered the same fate, and so the Fists of the Heavens were buried away deep within the desert.

Centuries later, after the great Cataclysm, Al'akir fell during the War against Deathwing. His death created a power vacuum that caused a civil war among the remaining air elementals, squabbling over who was strong and clever enough to take his place. One amongst them, Typhinius, sensed Al'akir's lingering essence within the weapons and uncovered them, using to end the civil war by cowing those who respected Al'akir's legacy and overpowering those who did not. While the Fists of the Heavens had calmed somewhat with Al'akir's death, they were still unstable; it took all of Typhinius's efforts to keep their chaotic energies from tearing him apart. Drunk with power, he attempted to launch yet another invasion of Uldum while most of Azeroth's champions were preoccupied with the Legion Invasions. Wishing to finish what Al'akir started, he led his forces against the Ramkahen tol'vir but was swiftly defeated, the power of the Fists alone proving insufficient to win his war.[2]

Typhinius retreated to Skywall, where the Monk Grandmaster and Li Li Stormstout tracked him down and finally killed the mad djinn. The Grandmaster held the Fists of the Heavens and, using the monks's teachings of balance and harmony of spirit, they were able to wield the Fists as Typhinius and Iramaat could not, using them in battle against the Burning Legion.[3]

Following the Legion's defeat, the Grandmaster sacrificed much of the weapons' power to remove the corruption from the Sword of Sargeras.[4] 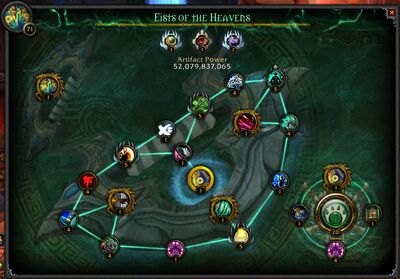