Fizzle Brassbolts is a gnome co-owner of the Speedbarge floating on the Shimmering Deep of Thousand Needles. Pilot Longbeard is a friend of the Brassbolts. 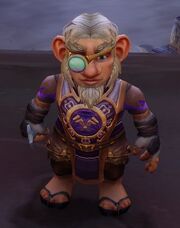 Like many currently aboard the barge, he was previously located at the Mirage Raceway which he had built along with the goblin Pozzik because they wanted to prove the superiority of their respective race engineering. Then they both built rocket cars and enlisted teams to drive them.[1]

Fizzle is an avid member of MEGA, the Mechanical Engineers' Guild of Azeroth.[2]

I tell ya this guy's driving me nuts! Does anyone truly believe that a goblin could help run anything so magnificent as this speedbarge?

All they know how to do is blow stuff up and half of the time, they take themselves out doing even that!